Designer James Merry has created futuristic headpieces for Icelandic musician Björk and her flute players to wear during the Utopia tour.

The masks were designed by Merry to compliment the costumes and sets for the tour of the album Utopia, which Bjork described as "magically utopian" in an interview with Dezeen.

Merry, told Dezeen that he handcrafted the headpieces for the Icelandic musician and her 12-person flute ensemble to appear as extensions of their bodies – as if "new bones had grown out of their heads and half-transformed into orchids".

"Björk had spoken with me many times about the idea to use the costumes and headpieces to give a more 'avatar' sort of appearance to the players – meaning a fuller transformation of the character from human into something more sci-fi and digital," said Merry.

"I tried to keep in mind the very specific utopian world that Björk had been creating around the album and tried to make something that would fit into that, giving Björk and the flute players this specific character: orchid-like, mutated, individual, but united – a matriarchal tribe on an unknown island starting anew."

Each headpiece was made individually by hand and designed specifically for Björk and the flute players on stage. "It was important to me that each design was different from the other so that they would look cohesive together but still have their own individual character," he explained. 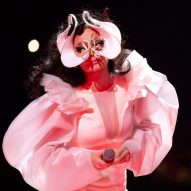 "During rehearsals, we tried on lots of different prototypes and I let each player gravitate towards the sort of shape and silhouette they felt most themselves in," he continued.

"Then once that was worked out, I went away and made the final pieces specifically with each person's preference and personality in mind."

Given that the musicians had to play complex flute arrangements and perform choreography on a rotating stage, the headpieces needed to be lightweight and practical to not block their instruments.

"I couldn't put anything that would obstruct the mouth or the eyes, and they also had to be very lightweight," said Merry. "There are some head-banging moments in the show, so I had to make sure they were easily fixed in place, with as little distraction and as much comfort as possible."

"Those restrictions are usually quite fun to work with, I think they forced me to come up with designs I might not otherwise have discovered," he continued.

Merry crafted the headpieces from thermoplastic, which has a felt-like texture that hardens to a tough plastic when heated.

He designed and cut out each pattern and threaded the pieces with wire so that they retained their shape, then heated carefully until they became hard enough to hold their form but still felt soft.

"The thermoplastic is quite an exciting material to work with, bending and shaping it by hand to create a new sort of canvas to embellish with more traditional needlework or beading," he said.

Afterwards, he beaded pearls onto the surfaces and embroidered the edges with gold cord to define the white surface.

"I was also very aware that these headpieces needed to work from a distance - given that we would be playing shows at large open-air festivals," he explained.

Björk's unique visual language often draws upon themes of nature. In a recent interview with Dezeen, the Icelandic musician spoke of her sets and costumes for her Utopia world tour, which were inspired by classic Icelandic paintings and summer nights.

Photography is by Santiago Felipe.