New York design firm MKCA has refreshed the interiors of a seven-storey residence in the city with two stairwells, and new glazing to draw light down from a rooftop patio.

Local firm by Michael K Chen Architecture (MKCA) added a sculptural stairwell, an elevator, and double-height windows to the back of home, as part of the extensive renovation.

The Neo-Grec building – typical of the neighbourhood – was originally a single-family home built in 1879, but was later divided into 17 apartments. MKCA found the structure in disrepair, and transformed it back into a family residence with five bedrooms.

"Conceived as both a family home and a setting for large-scale entertaining and events, the house is organised around multi-directional and multi-level circulation," said MKCA.

The studio sought to balance the building's history and context with a contemporary interior. White surfaces and herringbone floors provide a backdrop for more contemporary details.

"This is accomplished largely through an exceptional attention to craft, augmented by digital methods for design, coordination, and a broadly collaborative approach," said MKCA.

A focal point of the townhouse is a staircase that spans the full height of the home, with steps that have irregular shapes edges poking out through the railings. A handrail links thin, braided bronze rods together to form the balustrades.

Another stairwell at the rear connects a dining room, kitchen, and basement with a lounge and wine cellar. It is surrounded by glazed terracotta tiles on the walls and features travertine block steps. 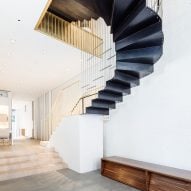 The studio substantially rebuilt the townhouse and designed the interiors as well, with a series of custom-made pieces and additional furniture commissioned by designers.

In the sitting room, an expansive cobalt and aluminium work by artist Yuzu Ono hangs over a white marble fireplace. Nearby are an ebonised ash writing desk and chair by sculptor Christopher Kurtz, and a roped design by textile artist Dana Barnes on the floor.

Kurtz also designed the dining chairs, which surround a vintage table by mid-century designer Poul Kjaerholm. Lighting designer Bec Brittain created the chandelier in the dining room and sconces in a master bathroom.

For the exterior of the townhouse, a vertical garden with native woodland flora now climbs up the rear facade. The green wall was designed in collaboration with conservation botanists from the State University of New York (SUNY).

"Some plantings used are federally endangered species due to the impact of climate change, and are being propagated for the first time as a test case in urban conservation gardening," said MKCA.

The studio also refurbished the street-facing facade, using angular blocks of terracotta to recreate the brownstone on similar Neo-Grec buildings.

MKCA has previously renovated an apartment in the city's West Village neighbourhood – one of many updated residences completed recently across New York.

Others include a light-filled home in Chelsea with a central kitchen by BoND, a West Village penthouse with a rooftop deck and pool by TBD, and an enlarged Tribeca residence with a sculptural staircase by Dash Marshall. 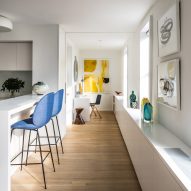