Digital design store and gallery Adorno has launched a collection of products created by emerging designers based in Beirut, Lebanon.

Works by 15 designers were selected and the collection was unveiled last month during Beirut Design Week at an exhibition within a recently restored 1930s apartment block that was used by snipers during Lebanon's civil war.

The Beirut Collection follows an open call that was put out in April 2018 to find the best independent and emerging designers whose work best expresses the design character of the region.

In particular, the judging panel were looking for submissions that chimed with this year's design week theme, Design and the City.

Following the exhibition, some of the pieces were selected to be sold through Adorno's online store.

The showcase spans furniture, lighting, ceramics, artwork, and architectural installations with highlights including a series of dumbell-shaped candleholders by Wyssem Nochi made in clear, gold and silvered glass.

When the base is filled with water, the candles float in the vessel's stem. The design, Nochi said, is a reference to an outline of a lightbulb that he spotted graffitied on a building in the city as a protest against the country's daily power outages.

Meanwhile Paola Sakr's vessels are made using concrete cylinders and material scraps that she collected from construction sites around the city.

Others used more unusual locally-sourced materials such as Youmna Geday, whose circular wall light, called Unborn Creatures of Light, is handmade from 59 reinforced eggshells lit from within by LED bulbs.

Zeina Aboul-Hosn and Marianne Sargi's bottle-shaped vessels are made using Lebanese red clay, while Thomas Trad's tables are inspired by Japanese joinery, but made in Beirut from slabs of various colours of marble. 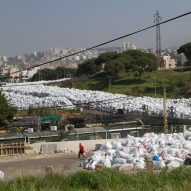 "Compared to other communities Beirut doesn’t have a clear design heritage which gives space for each maker to design and experiment on their own," explained Salameh.

"Despite that, the craft skills and handmade approach has always been high on the agenda."

"During the past couple of years, and for the first time in our recent history, the city is experiencing a rise in local independent initiatives and movements wanting to reshape our city to become a more just, tolerant and livable space," continued Salameh.

"The playfulness and the honest reality that the pieces express are interpreting the rough history of the city while visualising the current state and positive future to come."

The platform plans to add new cities to its roster while also adding to its existing city collections.

"Beirut has always been interesting to both of us," Snorre Anderson told Dezeen. "It's the first Arabic country we have worked in. The design here is touched by the culture here in Lebanon – it's very playful."

"I would definitely say it has something of a "no-rule" culture," added Clausen. "They take materials directly from the streets and transform it into design. There isn't really an established design scene here, so they are building it from scratch and that makes it very free."

In addition to the exposure that the exhibition and online platform provide, the Beirut designers also benefit from technical and manufacturing support provided by Fabraca Studios – a collaborative, architect-led initiative, which works with designers and craftspeople to create bespoke lighting and furniture.

"We want to help designers sell their work," stated Snorre Anderson. "We are creating a sales channel that allows them to reach a new audience. It's a collaboration in a sense that we bring people from different design communities together, and we are presenting them together. In this way they are strengthening each other and providing an international view on design."

At last year's Beirut design week, the city's so-called trash crisis fueled a slew of recycled and upcycled projects such as biodegradable containers made from coffee grounds and grocery bags made from advertising banners.

Photography is by Taym Karesly.