The Lapella chair is an updated version of Wegner's Shell Chair CH07. Zaha Hadid Architects' chair features a winglike silhouette with three tapered legs made from palissandro stone and carbon fibre composites – as opposed to the original laminated wood and upholstered fabric.

Using the proportions and scale of the original design as its starting point, Zaha Hadid Architects wanted to create the thinnest and lightest stone structure.

To achieve this, the designers worked together with London-based engineering firm AKT-II and the University of Westminster to calculate the minimum thickness needed to support the structure. This was achieved by testing samples of the stone under various degrees of tension.

"Working with the University of Westminster to find out what forces the stone could take, we took a sample of the stone and used the laboratory machinery to test the tension on it," said Edoardo Tibuzzi, structural engineer at AKT-II.

"By understanding what loads made the sample break, we could understand how much force we could put on the actual material itself," he told Dezeen.

The forces acting on the stone chair were mapped to find areas of high tension and high compression. As stone is strong in compression, but not tension, the chair was reinforced with an internal carbon fibre layer.

The thickness of the carbon fibre was determined by the levels of tension that different parts of the chair would be under.

"The stone works well in compression so if you put a load onto it, it resists the load, but as soon as you try and put tension in it, it doesn't work well – that's why generally stone is used in vertical structures like facade elements or masonry," explained Tibuzzi.

"What we tried to combine materials to allow the stone to perform in compression and the carbon fibre to take the tension forces – this combination of two materials allowed us to achieve a very thin kind of profile for the stone, to really carve out a lot of the material." 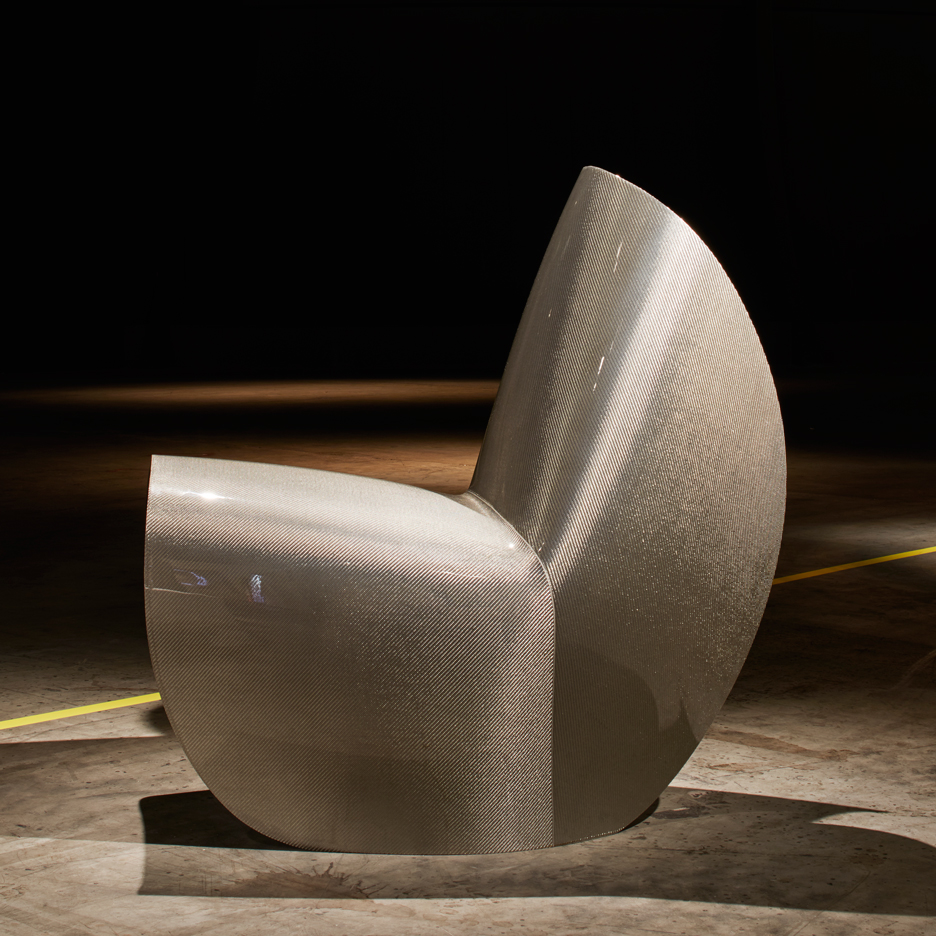 The stone was milled using CNC machinery, while the carbon fibre was inserted in layers using a vacuum in a patented structural process. Finally, the stone was polished and cleaned.

Lapella was conceived for the Stereotomy 2.0 and Digital Construction Tools event arranged by NYIT School of Architecture and Design in New York, between 16 April and 29 April 2018.

The studio provided a technical explanation of how the chair was constructed: "The patented process of manufacture harnesses the compressive properties of stone and the tensile properties of carbon fibre to achieve unparalleled thinness, lightness, and structural performance," said Zaha Hadid Architects.

"This graduation of stress and strain internal to the parts are articulated through varied thickness of the stone and informed the face selection for application of tensioning carbon fibres."

Carbon fibre is appearing in a growing number of products as designers experiment with the material. Previously, the studio recreated its folded Kuki chair using carbon fibre, while Thomas Missé designed a lightweight, stackable chair for Mars.