German design studio Tarantik & Egger's minimalist shower is made from a series of pipes joined together by hidden patented connectors.

The simple freestanding design, which connects directly to a garden hose, is made in several steel sections yet appears like a single pipe that loops around itself at the base to form a sturdy stand.

"Its form pays tribute to the natural flow of water," explained Tarantik & Egger, who achieved the seamless design by creating a series of patented connectors  that are hidden within the piping.

"Although they can not be seen inside the shower, [the connectors] are the ones who ultimately make the design stand out," said the designers of the patented parts, which are produced by aircraft maker Dornier.

In addition, the shower, which is designed for use in the garden or around the pool, is freestanding and can be mounted on grass as well as a stone terrace, tiles, or sand without the need for any additional fixtures.

Debuted as a pre-production model in Milan last year, the outdoor shower has now gone into production with Swiss brand Küng Sauna under the brand name The Garden Shower, where it is available to order in bespoke colours. 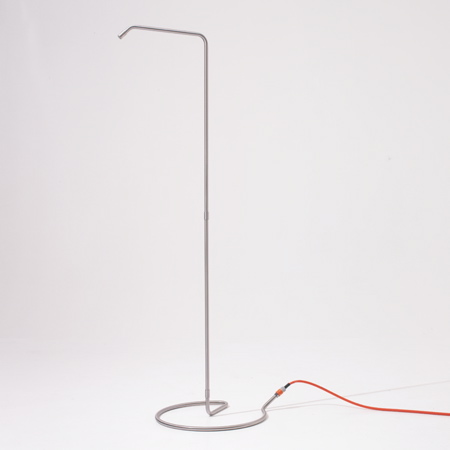 "Our top priority is to think through our designs in terms of design and content," they continued.

"It is nonsense how many unfinished products flood the market. They consume valuable resources and waste the time of the buyers. What is good for us as a society is less but better things."

In 2008, Belgian designer Tom de Vrieze created a similarly minimaliast outdoor shower design for Extremis, which also connects directly to a hosepipe but uses water that has been warmed by the sun.