The sawtooth brick facades and steeply pitched roof of this house designed by Mole Architects in Ely, Cambridgeshire, are derived from architectural features found at the city's famous cathedral.

The Cambridge-based studio was tasked with developing a two-storey family house on a plot in Ely's central conservation area.

Fijal House replaces a garage on a site that was intended to accommodate another property when the street originally was laid out in 1905.

The style of the two Edwardian detached houses on either side of the site informed the building's use of brick and its different applications across the main facade and other elevations.

"The architectural expression of the brick-clad house is a contemporary interpretation of the Edwardian differentiation between the plain flank walls and the decorative fronts," the project team explained.

The front elevation features white bricks laid in a sawtooth pattern that evokes the dense linearity of the engaged columns that flank Ely Cathedral's entrance.

The fully bonded bricks are set at an angle so their protruding corners form vertical ridges, while the bricks cladding the side elevations are laid in a more typical stretcher bond pattern.

The house's other nod to the local landmark is a steeply pitched roof, which replicates the angle of the cathedral's nave and features a standing-seam surface reminiscent of its lead roof.

An offset entrance is set beneath a precast concrete lintel that extends onto the front elevation above the window of a snug facing the street. Colourful encaustic tiles separate the window from the recessed doorway. 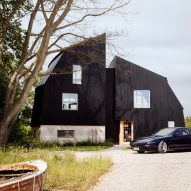 The front door opens into an entrance hall that connects with the largely open-plan living spaces on the ground floor. The layout responds to the client's request for rooms that can be opened up for parties but acoustically separated when in daily family use.

In addition to the snug, this level accommodates a kitchen, dining area and lounge facing the garden at the rear. Glazed doors connect both the dining space and living room with an outdoor patio.

A utility room and toilet are housed in a central service core, which aligns with a compact study space positioned beneath the stairs leading up to the first-floor bedrooms.

"The upper floor sits under a steep pitched roof with exposed rafters – giving the three modest bedrooms warmth and a sense of scale and character unusual in a suburban house," the studio added.

Roof lights arranged along the south side of the building allow sunlight to reach the double-height dining area and stairwell.

A simple interior material palette includes dark stone floor tiles and pale ash used for wall panelling and the stairs that connect the living spaces with the carpeted upper floor.

Mole Architects' previous residential projects have included a property with an angular roof designed to evoke a seagull's wing, and a home comprising a pair of blackened-timber structures that resemble the upturned hull of a boat.

Photography is by Matthew Smith.