The design duo behind Botter wanted to create a collection that represents their Caribbean roots – Rushemy Botter is originally from Curaçao and Lisi Herrebrugh is half-Dominican – while drawing attention to how the region is being damaged by global consumption and oil exploration.

Luxurious streetwear garments were accessorised with colourful scraps of plastic used as neckties, while one model wore an inflatable toy dolphin affixed to his head and a glossy raincoat resembling an oil slick.

The juxtaposition of high-end designs and cheap materials created a metaphor for washed-up waste on Caribbean beaches.

"We combined different inspirations together to create the collection," said Botter. "We were very intrigued by the lotto houses which you see on every corner of the street in the Dominican Republic and Curaçao."

"I see my grandma going to these lotto houses and spending her last money in hope she would win. But the reality is that most of these organisations are corrupt and will never give a prize away," he continued.

"They play with the hope of the poor for their own fortune and we wanted to translate this aspect into the garments."

The collection combined boxy, androgynous suits with floral prints and logo t-shirts for gas and soft drink companies; intended as a critique on hyper-consumerism and the impact of offshore drilling on the world's oceans.

However, the designers intended the collection to have an optimistic undertone by also highlighting the vibrancy of Caribbean culture. 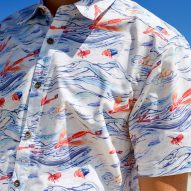 "We found it very beautiful how the people (in the Dominican Republic) get creative with less, they have to survive and don't have the access to all materials like we do in Europe," he said.

"Therefore, you will see surprising combinations of cheap and rich materials together to create a new image."

Botter is a menswear label but the show featured a unisex cast and was notable for its racial diversity.

The show was a thematic follow-up to Botter's first collection, which the duo launched after graduating from Antwerp's Royal Academy of Fine Arts in 2017.

This collection, named Fish or Flight, drew inspiration from the everyday lives of fisherman working in the Caribbean. During their 2018 Berlin Fashion Week presentation, the designers combined garments from Fish or Flight with new looks to create Al Fombra.

Botter was one of ten shortlisted labels to show in Berlin as part of The International Designer Program, an initiative by Mercedes-Benz to support and develop talented young designers.

JW Anderson also showed a unisex collection earlier this year, as part of his efforts to slow down the pace of fashion.

Botter isn't the only label to focus on ocean pollution – Spanish designer Adolfo Correa recently designed a Hawaiian shirt made from waste plastic.