The Space Needle observation tower in Seattle has reopened to the public following an extensive overhaul by American firm Olson Kundig Architects, which involved adding "the world's first and only revolving glass floor".

Olson Kundig's Century Project saw the renovation of the 184-metre-high structure, which was built for the 1962 World's Fair, and has remained a landmark on the skyline and a popular tourist attraction.

The firm reconfigured and stripped back the interiors of the disc-shaped volume at the top of the tower's massive hourglass-shaped stilts, where an observation deck is located above a restaurant.

Inside the restaurant, the team replaced the existing rotating floor with a glass version called The Loupe, which they claim is a world's first.

Like its predecessor, the new glass floor makes one complete orbit per hour. But it now offers diners views of the tower's structure and mechanics, as well as the Seattle Center campus below.

Other changes focus on offering uninterrupted 360-degree views of downtown Seattle and the Puget Sound – an estuary along the northwestern coast of Washington state – from the deck located on the level above.

Tall glass screens take the place of wire safety cages and metal barriers, which previously wrapped the outer deck and blocked views from the platform. The glass panels measure 11 by 7 feet (3.4 by 2.1 metres) and are slanted to avoid glare, while glass benches are interspersed between.

"The Space Needle has always been a treasured place where we can observe the contrast between the changing city of Seattle juxtaposed against the natural resources that surround it," said Olson Kundig design principal Alan Maskin, who led the project, in a statement. "Our design 'widens the lens' of that human perspective."

To maintain views on this level from indoors, the team stripped out the lower portion of the deck's wall and added in more glazing. In total, the amount of glass in the Space Needle has increased by 196 per cent.

"The extraordinary skill and dedication required to design and build the Space Needle in 1962 brought out the best of our collective design and consulting team," said project architect Blair Payson.

"In collaboration with Richard Green at Front, Arup, Hoffman Construction and MKA, we pushed the use of glass to the very limits of contemporary technology in a manner we are confident the original designers would support." 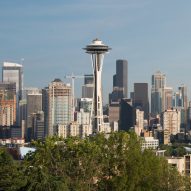 A spiral steel, wooden, and glass staircases leads from the observation deck to the the restaurant, eventually landing at a glass oculus where another window reveals the structure below, as well as the elevators. There are also wider stairs and a wheelchair lift to improve access to the observation deck.

Olson Kundig's updates – first revealed last year – aim to maintain the existing profile of the Space Needle – which is apparently based on the shape of a tethered balloon and a flying saucer.

To help with this, the team enlisted experts in historic preservation. They included the City of Seattle Landmarks Preservation Board, local architecture historians and preservationists, as well as a structural engineer who worked on the original design.

The Century Project marks the third renovation to the tower since it was completed by architect John Graham with businessman Edward E Carlson. The 1982 addition of the SkyLine event space at 100 feet (approximately 30 metres), and the new Pavilion entrance and expanded retail space added in 2000, were among previous changes.

Maskin is among the five principals that run Olson Kundig. The others include Jim Olson – who founded the practice in 1967 – Tom Kundig, Kirsten R Murray and Kevin M Kudo-King.

Along with a host of private houses across the US, the firm's other projects include plans to complete the Bob Dylan Center in Oklahoma.

Top photograph is by Chad Copeland. 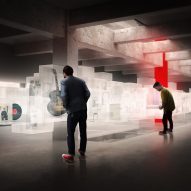