IKEA has enlisted the help of Dutch design duo Scholten & Baijings to create fresh takes on its Klippan sofa and Poäng armchair by adopting the widespread trend of hacking.

Inspired by the creativity of people within the IKEA hack communities, the Swedish retail giant choose to take on this DIY task itself, with the help of designers Stefan Scholten and Carole Baijings.

The Lyskraft collection sees the duo overhaul a series of IKEA's most popular items, including the Klippan sofa and the Poäng armchair, by introducing new textures, colours and patterns.

"Our products have always been made for everyone. And everyone has always taken the opportunity to express themselves through our products – by modification or customisation, repurposing or DIY," said IKEA's creative leader Michael Nikolic.

"Altering IKEA products to fit your personality and the soul of your home may be described in many ways, but commonly goes by the name of 'IKEA hacking'," continued Nikolic.

"The hackers are an inspiration to us, and with Lyskraft we feel it's our time to show we got inspired by them."

Taking its name from the Swedish word for "luminosity", the Lyskraft line aims to fuse the stability and reliability that come with staple IKEA products with the trendy and colourful elements characteristic of Scholten & Baijings. 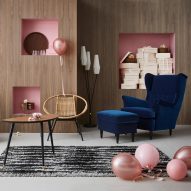 The hope is that the reworked products will make it easier for everyone to repurpose some of the IKEA's most popular but basic furniture items, in support of the hacking spirit.

The Poäng armchair has been given a colourful makeover, now boasting three different designs in coral, blue and bright yellow.

Two quilted covers and a series of pastel-coloured, geometric legs have been introduced to spruce up the Klippan sofa. According to the designers, this new quilting technique adds an "exclusive" touch to the piece through its soft shapes and fresh pops of colour.

The duo also designed glassware made from pressed glass for the new collection, as well as napkins and melamine trays.

Ten of the most inventive IKEA furniture hacks

"Stefan and Carole both embed the type of curiosity and playfulness that we wanted to celebrate. Together we've captured the essence of the IKEA functionality, quality, design and value," said IKEA's creative leader Michael Nikolic.

"We think all the hard work paid off in the end," said Baijings. "The collection carries our personal signature and is bursting with colours. The pressed glass collection is our highlight because it's completely different from what's on the market today."

The limited edition line launches this month alongside the Swedish firm's Gratulera collection, which celebrates its 75th birthday by relaunching "vintage" furniture pieces from the 1950s to the 2000s.

Back in February the company partnered up with Tom Dixon to launch the Delaktig bed, alongside a series of modular elements that allow users to customise and hack the furniture.