Open AI — a non-profit started by Elon Musk — has found a way to programme a robot hand so that it can nimbly manipulate an object using human-like movements it has taught itself.

"We've trained a human-like robot hand to manipulate physical objects with unprecedented dexterity," said OpenAI of its Dactyl system, which is shown in a video twisting a block into 50 different requested orientations.

Dactyl works by training the robot hand in a simulation and then transferring the knowledge gained there to the real world.

Simulated learning is becoming widespread in AI, withDactyl representing a milestone in terms of how well it's been able to execute the task its trained for in reality.

The result is a robot hand that can complete many tasks, efficiently, using a range of movements, without them having to be individually programmed by a human.

"We're working on teaching robots to solve a wide variety of tasks, without having to programme them for any one specific task," said Alex Ray, a machine learning engineer at OpenAI.

"The system runs on a human-like robot hand and we used reinforcement learning and simulation to teach the robot how to solve tasks in the real world."

OpenAI says that Dactyl's edge comes from an approach it calls "domain randomisation". This means that rather than trying to make its simulation a completely accurate reflection of the robot's reality — a common goal with simulations — it instead presented the robot with many realities, each slightly different.

Sometimes the angle of the hand would shift, for instance, or the block might be heavier. These realities were randomly served up to the AI, and it had to manipulate the block in every instance. 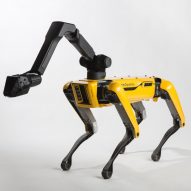 Boston Dynamics to start selling SpotMini robot as soon as 2019

All together, it spent the equivalent of 100 years solving block problems within the simulation.

"Our learning algorithm sees all of these different worlds, and that lets it learn a way of manipulating the block that is very robust — robust enough so that eventually we can accomplish the same task in the real world," said Ray.

The system is strong enough that it works in the real world even with imperfect knowledge of the block's position. It is fed coordinates from the robot hand's fingertips and images from three cameras — but sometimes this vision is blocked by the placement of the digits.

Another interesting feature of Dactyl is that it uses some movements that are typical of the human hand, but the OpenAI engineers did not teach it these behaviours — it came to them autonomously. This includes movements OpenAI describes as finger pivoting, sliding and finger gaiting.

That the robot hand tends to favour its little finger more than a human would is likely due to extra flexibility it has in that digit.

OpenAI was started by Musk, Y Combinator's Sam Altman and other backers in late 2015. One of the founders' motivations was to combat the threat posed by AIs that have surpassed the need for human intervention.

Musk has previously called on governments to regulate AI and is also a critic of autonomous weapons.

OpenAI's mission is to promote and develop "safe" AI. It also wants to make the technology evenly and widely distributed, rather than concentrated in the hands of the few.