Phoenix studio Wendell Burnette Architects has completed a dwelling in central Arizona that follows the contours of its rugged desert site and provides vistas of the surrounding peaks.

The Hidden Valley Desert House is located in Cave Creek, a small town just outside of Phoenix. Positioned on a hilly site dotted with saguaro and teddy bear cholla cacti, the residence offers views of the mountains and the sprawling city in the distance.

The project was designed for a couple with grown children who desired a serene home that embraced the natural setting.

"For our clients, this house was about purging and simplifying their life, and also about providing an indoor/outdoor house for their birds, koi, Rhodesian ridgebacks and one cat — and their very specific way of living," said Wendell Burnette Architects in a project description.

Envisioned as a "long pavilion for living", the 3,125-square-foot (290-square-metre) home is composed of a broken-up bar, sandwiched between a plinth and an expansive canopy. An outcrop of pinkish stone lining the eastern edge of the property informed the home's siting.

"The geology of this rarefied site condition is extended westward into a simple ground-based plinth at an elevation of 2,450 feet (747 metres), roughly following the east to west contours of the site," the team described. "Hovering above the plinth is a large shade canopy that embodies the necessary sustenance for this shelter as a home."

The base of the home has concrete masonry walls, an economical material that is commonly found in America's desert architecture. Within this fairly opaque plinth, the team placed a garage, library, fitness room and storage space.

The main level encompasses the public zone and a master suite. Its varied facades are clad in a mix of cold-rolled steel, a paper-based product called Richlite, and rough stucco. The stucco treatment was influenced by the Japanese concept of Wabi-Sabi, in which imperfections are perceived as beautiful.

The interior comprises a cluster of forms – referred to as a "dispersed core" – that contain programmatic areas and also serve as partitions. "The cores meld with the underside of the canopy while housing a diverse range of smaller programs that free up the space within, without and between," the team said.

Careful consideration was given to the roof design. One of the home's notable feature is its thick fascia made of shiny stainless steel, which captures reflections of the sky while hiding rooftop photovoltaic panels.

The soffits are also distinctive, as they are sheathed in a black fabric meant to offer "a continuous feeling of deep soft shade". The fabric, which continues indoors, conceals gang-nail wood trusses and batt insulation.

On both the bottom and main level, the team incorporated shaded outdoor areas that total 1,250 square feet (116 square metres), including spaces for cooking, dining and excersising.

Other projects by Wendell Burnette include a zinc-clad home that sits in the middle of a Wisconsin crop field, and a courtyard house near Phoenix that features walls made of rammed earth. 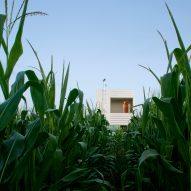 Wendell Burnette builds little house on the prairie in Wisconsin