This year's Antepavilion is an inflatable arts venue on a barge that unfurls in just 12 minutes, created by architects Thomas Randall-Page and Benedetta Rogers.

Called AirDraft, the floating theatre boasts a balloon-like construction that means it can deflate in five minutes, allowing it to manoeuvre easily under bridges along London's waterways.

The project was chosen from 132 entries to be built as this year's Antepavilion – an annual competition to design a temporary structure at Hoxton Docks on Regent's Canal, held by the Architecture Foundation and sponsored by property developer Shiva.

On Saturday 11 August, the floating theatre will set off on an eight-day festival tour, mooring at different cultural venues and spaces along the way to host arts events.

"Part of the narrative is about giving more visibility to existing cultural institutions on the canal," Rogers told Dezeen.

Many arts venues are under threat from London's rising rents and tightening licensing laws, as east London becomes increasingly developed. 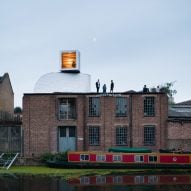 Last month Hackney Council approved plans for midnight curfews at the weekends and 11pm during the week for new venues. At least one of the AirDraft performers has already seen their usual venue affected by the change.

"The cultural life of Hackney is important, and it's every bit as important as a good night's sleep."

For last year's Antepavilion, PUP Architects built a pavilion disguised as an air duct on top of a canal-side warehouse, to provoke local planning authorities to reconsider rooftop developments.

Ouse, the barge AirDraft rests on, used to be used to transport steel. Integrating an arts venue into the historic hull neatly symbolises the merging of the area's industrial past and its creative present.

Although the pop-up pavilion and experimental arts venue is temporary, Randall-Page and Rogers hope it can serve as a pilot for future floating performances.

"There's no reason it couldn't go down onto the Thames or onto other waterways," he added.

AirDraft can hold an audience of 30, who enter through the barge's hatch and descend down the stairs to an area beneath the waterline equipped with a bench and rack for people to store their shoes.

From here they pass through a flap to the theatre's exterior, where they can lounge on the bouncy inflatable floor or lean against the squishy air-filled sides.

"You could have a wild mosh pit in there," joked Randall-Page. "But I don't think it would be very good for the structure."

Colour choices were limited in the fabric required, so the architects opted for yellow as a nod to the work of Jeffery Shaw, whose inflatable artworks influenced their concept.

In the late 1960s Shaw created interactive sculptures, often yellow in colour, where people could bounce around on giant air cushions under a transparent dome.

Airdraft is also designed to be selfie-friendly in colour. "I think everyone looks good in golden light," suggested Randall-Page.

In the day, its bright surface creates eye-catching reflections on the water and surrounding buildings, while at night its orb-like form glows like a giant firefly.

The architects collaborated with inflatables experts Cameron Balloons to create the structure, which is formed of two sections and uses two different kinds of fan to inflate.

Its shape is informed by the spherical geometry necessitated by the physics involved with inflatables, with a series of cords used to alter the shape to create space for the clear panels that run along the perimeter, giving a window onto the waterline.

"From some angles it's very butternut squash," said Randall-Page "We're trying to steer it down the vegetable line [of comparisons]".