These faceted metal plant pots by Brooklyn studio The Principals can be piled up to create a "modular vertical garden".

The Prism Planters are made from sheets of aluminium or pre-rusted steel, which are folded into triangles to form a container.

The vessels tessellate together, so the pots can be stacked together in different arrangements, leaving spaces for plants to grow from their tops.

The design is based on modular constructivism – a style of sculpture based on repetitive elements that grew in the 1950s and 60s. American sculptures Erwin Hauer and Norman Carlberg were among its key proponents.

Each is fabricated by laser-cutting the metal, which is then folded by a press-brake and riveted together, or flat-packed for easy transportation.

Once assembled, a triangular gap is left inside to provide room for a six-inch-tall (15-centimetre) plant pot and a drainage system for water underneath.

"I wanted to use a material that was both super durable but could feel light and accentuate the faceted geometry of the system," said Seskunas. "Anodised aluminium sheeting is an extremely durable finish commonly used for custom doors and window frames to imply solid metal."

"I thought it would interesting to subvert its normal use as a faux finish and instead play with it as a folded hollow vessel," he continued.

The pots can be connected together both horizontally and vertically via small triangular corners, fixed with wing nuts and bolts. As greenery spills out over the top of the structure, it provides a contrast to the metallic material.

Metal was chosen so the pots can be used outside, but they are equally suitable for indoors.

"The system is simple enough for anyone to use, but geared specifically towards urban environments where vertical gardens make efficient use of limited space, while adding much needed greenery to the urban landscape," Seskunas said.

The planters were first unveiled last year as a pyramid structure in the courtyard of Brooklyn creative venue A/D/O, followed by a similar presentation at the Bronx River Arts Center.

They were more recently used to create an arch installation during New York's design week earlier this year, and are set to feature in the window of the Tenoversix store in Dallas, as well as part of New York fashion brand Nomia's Spring Summer 2019 show.

A number of designers and architects have also taken on the task of reinterpreting the humble plant pot.

Recent versions include a stacked system by Chen Chen and Kai Williams that has a hidden saucers at its base, and a ceramic collection that Danish architecture firm COBE based on one of its own building. 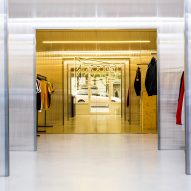 The Principals was founded in 2012, and is based in Brooklyn's Williamsburg neighbourhood.

Describing itself as an "anti-disciplinary" design studio, it undertakes a wide-range of projects, with examples such as furniture for a Brooklyn clothing and record store, and an installation for a blanket designed for women to have sex while on their period.

Photography is by Dan McMahon.