Moshe Safdie's firm has completed a set of stepped homes on a hill overlooking the Yangtze River in Chongqing, China.

The 42,740-square-metre Eling Hill development includes 126 apartments spread across three bands of buildings rising up a hill on the Yuzhong Peninsula, in the city in central China

At the summit of the hill two rounded five-storey blocks, have uninterrupted views of the river as it carves its path through the city.

Below the mid-level, apartments are stacked on terraces cut into the sloping ground, curving around the site to match the topography of the hillside. At the lowest level six seven-storey buildings are sunk three storeys deep into the hill.

Each apartment has a mix of indoor and outdoor space, with private balcony gardens part-shaded by swooping rust-coloured slats. 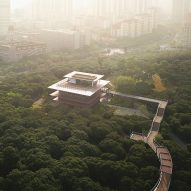 Its interlocking design gives each residences privacy whilst creating a harmonious, undulating facade.

Gardens, stairways and promenades connect the different areas of the site, which have been planted with trees and plants to create the effect of cascading greenery.

Residents also have use of communal pools and a four-storey clubhouse.

Canadian-Israeli architect Moshe Safdie founded his eponymous firm in 1964. Safdie Architects is currently building the Raffles City Chongqing, which they claim will be the "largest horizontal skyscraper in the world" when complete.

In 2016 Safdie Architects completed a pair of balcony-covered towers in Singapore connected by three sky bridges, the topmost one featuring a vertiginous swimming pool.