Japanese firm Mitsubishi Jisho Sekkei has completed a 272-metre high office skyscraper in Taipei, which is adjoined to a retail building clad in a delicate metal lattice.

The Taipei Nanshan Plaza project is situated in the Xinyi district, alongside Taiwan's tallest building, the supertall Taipei 101 skyscraper.

The Tokyo-based architecture studio won a government-led development competition to design the building for Nanshan Life Insurance. The firm's offices occupy the majority of the tower, which also contains restaurants on the top three floors.

Taipei Nanshan Plaza was built on a long and narrow site in the evolving business district that contains shopping, arts facilities and exhibition spaces, laid out on a masterplan drawn up by the Taiwanese government.

"In order to attract visitors to the site and create a lively atmosphere, we proposed a new landmark tower to draw people from a distance, paired with a human-scale podium to welcome them in," said Mitsubishi Jisho Sekkei.

"The idea was for the 272-metre tower to form a set with Taipei 101, creating a new skyline for the city while harmonising with the existing neighbourhood."

The architects added that the building's design is "inspired by the image of two hands joined in a prayer of thanks and peace", and "expresses the insurance company's gratitude toward its customers and desire for them to enjoy health and peace." 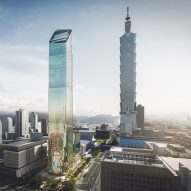 Taipei's latest skyscraper inspired by the shape of bamboo shoots

The tower is adjoined on either side by a low-rise retail annex and a cultural facility containing a multipurpose hall that enhances the site's connection with the surrounding neighbourhood.

The retail building features three stacked cubes that overlap in alternating directions to create an effect evoking "hands placed on top of one another".

The building's facades are clad in a three-dimensional stainless-steel lattice that references plum blossoms, the natural flower of Taiwan.

In the evening, a rooftop bar at the peak of the tower helps to transform the site into a beacon visible from across the neighbourhood.

The exterior of the retail building is also illuminated at night, which highlights the metallic facade treatment and causes trees on the terraces to be silhouetted against the glowing backdrop.

Taipei Nanshan Plaza and Taipei 101 are set to be joined by a skyscraper hotel. The 280-metre-tall Taipei Sky Tower, which is designed to look like a bamboo shoot, is set to complete in 2020.

Photography is by Shinkenchiku-sha unless stated.