Jun Takahashi's cult fashion label Undercover has released a down jacket with a hood based on an astronaut's helmet.

The punk fashion designer first showed the Astronautics jacket in Milan earlier this year, as part of his Autumn Winter 2018 menswear collection. But it became available to buy for the first time this week, by retailers including H Lorenzo.

The garment's key feature is the helmet hood, which features a transparent visor. It also boasts patches on its padded sleeves, similar to those worn by NASA astronauts, which bear the slogan Undercover Astronautics Agency.

The design is on sale in red and bordeaux colourways.

Undercover presented its Autumn Winter 2018 menswear at the Pitti Uomo show in January – Takahashi's second outing on the Milan catwalks as a guest designer.

The designer, 49, based his collection on Stanley Kubrick's 1968 masterpiece 2001: A Space Odyssey. 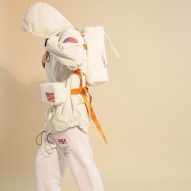 Snoods and raincoats were branded with HAL 9000, the name of the film's villain, a sentient computer with a glowing red 'eye'. Models carried rectangular shoulder-slung bags in the computer's image.

A team of models closed the show by walking down the catwalk wearing the jackets in shades of yellow, red, black and white. Their faces were half-obscured by the helmet hoods, which were lit from within.

The catwalk show was shared with fellow Japanese designer Takahiro Miyashita's label The Soloist. Both collections were formed around the palindromic theme of "order/disorder against disorder/order" but were designed in isolation.

Takahashi has based previous collections on the world of the silver screen.

He designed a previous collection in tribute to surrealist Czech filmmaker Jan Svankmajer, while the final look of his Spring Summer 2018 womenswear show featured twin models dressed as the Grady sisters from another of Kubrick's films, The Shining.

Takahashi started his label while still at the Bunka College of Fashion in Tokyo in 1993, where other alumni include Junya Watanabe and Yohji Yamamoto.

In an interview with Gaby Wood in the New York Times last year, he said: "The people who were on the edge of the world, looking in — those were the people I felt I matched. I was twisted, you know? I’m not so much anymore."

He grew up in a small town in Gunma Prefecture, a few hours north of Tokyo, but now works from a four-storey atelier in Harajuku. He credits the outlandish street fashion of the area as an influence.

Undercover has previously collaborated with Supreme, Nike, and Uniqlo.