The artist draws on the pop culture influences of his childhood – such as Star Wars, Zoids and Gundam – to inspire his creations, as well as model making, a popular hobby in Japan.

The result is a series of wearable sculptures that are both futuristic and nostalgic, with a cyberpunk aesthetic.

A key component of the Sai Gallery exhibition is Hiroto's series of headgear, each laden with an intricate assemblage of gadgetry and small parts, including items such as virtual reality masks, headphones and flash drives.

As in all of Hiroto's works, the products buried within the sculptures still function, so a wearer can use them from inside the artwork, giving each piece its own experiential component.

Unfortunately, this is only available to the buyer of the artwork, as the pieces are too fragile to be handled within the gallery space.

Other works shown at the Sai Gallery include a full-body suit that Hiroto has created together with the body-enhancing robotics company Skeletonics. 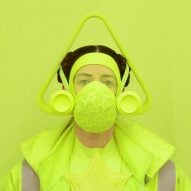 There is also a collaboration with the interactive design company Prototype Inc, designers of the "Tekki cockpit", a cockpit-style simulator for the Tekki video game.

For Hiroto's version of the cockpit, titled TYPE00R, he has rebuilt the machine using contemporary technology.

"The interpretation of his works is dependent on the viewer's unique frame of reference," said Sai Gallery.

"With the combination of internationally recognisable pop imagery and the distinctly Japanese model culture, his works simultaneously evoke a sense of nostalgia, whilst hinting at the near-future through a cyberpunk aesthetic."

The new artworks are exhibited alongside some of Hiroto's earlier pieces to form his largest solo gallery show to date.

The artist began by making dioramas from models and computer components as part of his student work at the Tama Art University's Department of Information Design.

Recently, he collaborated with Balenciaga on its Spring 2022 campaign, for which the models wore Hiroto's headgear and exoskeletons.

The fashion brand is fond of pop culture references, having collaborated with TV show The Simpsons on another campaign and released clothes in the game Fortnite.

Hiroto has also worked with the brands Gentle Monster and Shu Uemura.