Held at his Tokyo design shop last month, Kobayashi's Playscape provided the designer with an opportunity to design for his own inner child and create a "poetic" landscape that everyone visiting could interact with.

The park-like landscape included five items that visitors could play on and around – a swing, seesaw, cradle, mountain and rocking chair.

Each piece is covered with Kvadrat textiles while the internal frames are made from sustainably sourced Japanese hardwood.

The Playscape space was intended to be welcoming and to encourage playfulness in visitors of all age groups. 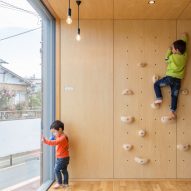 A special soundtrack was composed especially for Playscape by Japanese sound designer Masato Hatanaka, who has previously created music and sound in exhibition and architectural spaces as well as at fashion shows and installations. The custom soundscape was designed to enhance the happy atmosphere.

Playscape was supported by Japanese furniture company Karimoku, with whom Kobayashi has a longstanding relationship.

The exhibition was held as a final farewell to the Taiyou no Shita design store, which is now the newly rebranded Implements design shop, owned by Kobayashi.

Kobayashi founded his design studio in Tokyo in 2006. He is known for creating work that considers the balance between user, object and the surrounding space.

He describes his style as distinctly Japanese, and creates work that is aimed at being both connected to his country and pays close attention to the material used to make it.

Early this year Japanese architecture studio Hibinosekkei incorporated structures intended to encourage play into the interior design of a Tokyo support centre for children with developmental difficulties. These include a climbing wall and a swing.