Budapest is to introduce a ban on all buildings over 90 metres, but this will not impact Foster + Partners' plan to build a 120-metre-tall tower, which has already won planning permission.

The Hungarian government is introducing a skyscraper ban in order to preserve the skyline of Budapest, said Gergely Gulyás, minister of the prime minister's office, during a press conference.

Gulyás is reported in English-language news website Hungary Today as stating that the government is planning to introduce an outright ban on all buildings over 90 metres tall being built in the capital city.

Foster+Partners unveiled plans in 2017 to build the skyscraper in the south of Budapest, for national oil and gas company MOL Group. It is expected to become the tallest building in the city.

The 28-storey skyscraper will not be impacted by the ban, said Gulyás, because it has already been given the green light. 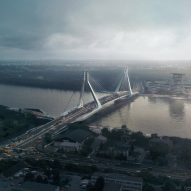 UNStudio designs major bridge for the Danube river in Budapest

Scheduled to be complete by 2021, the MOL Campus will be more than 30 metres taller than Budapest's current tallest building, the 88-metre-tall Semmelweiss Medical University tower, which completed in 1976.

Significantly, the Foster + Partners-designed building will also rise taller than the cupola on top of the dome of the Hungarian Parliament and the spires of St Stephen's Basilica.

The tips of both buildings are 96 metres high, which is said to represent the equal standing of the church and state.

Along with an outright ban on buildings over 90 metres high, Gulyás also announced that the government is intending to tighten control over the development of all tall buildings.

According to the minister, decisions on buildings over 65 metres high will now be taken on a case by case basis.

Earlier this year, UNStudio won a competition to design a new road, tram, cycle and pedestrian bridge in Budapest, crossing the Danube river. The cable-stayed structure would include two 93-metre-tall triangular-shaped pylons, which would support a span of 220 metres.