Architecture studio Barclay & Crousse used local stone, and cement with a reddish hue, to make this house on the outskirts of Lima match the colour tones of the Peruvian desert.

Sandra Barclay and Jean Pierre Crousse's firm, which is based in the Peruvian capital, designed Casa C3 for a clifftop site to the north of the city.

The building is heavily influenced by the characteristics of the site and the surrounding landscape, which is defined by the region's unique climate with its high humidity, but almost no precipitation.

The desert terrain features reddish-brown soil strewn with large boulders. Not far from the house, the ground drops steeply down to meet the Pacific Ocean.

The architects chose to embed the house in the topography and used materials found in the landscape to ensure it blends in with its natural context.

"Avoiding an objectual relationship with context, the house is conceived as a soil extrusion rather than an object in landscape," said Barclay & Crousse.

"Framing views is not a priority, but the creation of a microcosm that allows understanding its unique features by revealing its hidden qualities," continued the studio.

The property comprises a series of four volumes that step down the hillside. Each structure fulfils a specific function and is connected to the others by stone steps inserted into the landscape.

The first structure at the top of the hill contains a garage and entrance from the street that connects with a set of steps leading up to a larger volume accommodating the main living areas.

These rooms are set beneath a cast-concrete roof formed as a series of vaults that culminate in a cantilevered section projecting out over a private patio.

Large glazed panels on either side of the open-plan lounge and dining space can be retracted to allow sea breezes to waft through the building and provide an uninterrupted view towards the ocean.

Bedrooms are housed in two additional structures further down the slope, which feature rooftop gardens and terraces that appear as extensions of the terrain.

The lowest pavilion contains a master bedroom suite and a patio shaded by a slatted wooden canopy. The patio connects with a decked terrace lining a pool that appears as an extension of the sea below.

Simple construction methods used throughout the project allowed local builders without specialist knowledge to complete the building, which helped to reduce the overall cost. 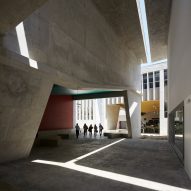 The structure was created by pouring concrete into recycled wooden formwork, while local masons carved the stone used to clad some of the external walls.

The concrete was mixed using local puzzolanic cement to give it a tone that blends in with the surrounding rocks and soil.

Barclay and Crousse founded their studio in 1994 in Paris, before relocating to Lima in 2006. Its previous projects include a university building with textured concrete walls that enclose a sequence of cave-like outdoor corridors.

Barclay was named as the recipient of the 2018 Woman Architect of the Year award for the firm's work on an archaeology museum featuring geometric forms cast in red-pigmented concrete.