The three outdoor benches were printed using XtreeE's technology and equipment, which includes a six-axis 3D-printing robot that can print concrete and clay with extreme precision.

Studio 7.5 had worked with other 3D-printed materials on previous projects, but they had never worked with concrete – whereas XtreeE have worked extensively with the material.

The concrete is printing in alternate layers by the robot head, moving in an continuous oscillating wave and slowly building up the layers. This movement creates the woven pattern.

By 3D printing the concrete the designers were able to create patterns that would be very expensive and challenging to create using only a mould. 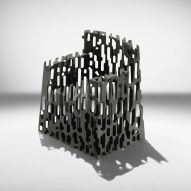 The benches are constructed using a minimal amount of concrete in comparison to the amount required with mould forms this reduces the carbon emissions created during the concrete production.

The bench is also much lighter than it could have been in solid concrete, and the pattern plays an important role in the aesthetic of the bench.

According to the designers, the woven pattern was developed specifically for the benches, and hasn't been used before. Since the launch of the bench, the material has been employed by other artists and companies working with XtreeE.

These benches form part of a collection of custom-made street furniture by Studio 7.5, best known for its longstanding relationship with the brand Herman Miller. the studio's Cosm Chair for Herman Miller has been longlisted for the inaugural Dezeen Design Awards.

In the Netherlands a bridge has been fabricated from 3D-printed concrete and the Eindhoven University of Technology are creating a series of concrete houses that they will 3D print and make available to rent.