The first 3D-printed concrete bridge has been completed in the Netherlands as a crossing for cyclists, but construction company BAM Infra claims it could take the weight of 40 lorries.

Made from pre-fabricated concrete blocks 3D-printed by robots, the 8-metre-long bridge forms part of a new ring-road being constructed around Gemert in the Dutch province of Brabant.

BAM Infra and Eindhoven University of Technology collaborated on the project, which they claim is the "world's first 3D printed reinforced, pre-stressed concrete bridge".

It took three months for robots to print the 800 layers of pre-stressed, reinforced concrete in sections in the university's laboratory.

"We are connecting for the future," said Marinus Schimmel, director of BAM Infra. "Innovation plays a crucial role in this. 3D printing does away with the need for auxiliary materials, such as formwork."

"This greatly reduces the amount of waste and decreases our use of scarce raw materials. And this working method also has a positive effect on CO2 emissions during the production process of the bridge."

"People need to build and maintain the robots, so the work will change," he said.

The bridge has pipped Joris Laarman to the post for the title of world's first 3D-printed bridge. The Dutch designer is currently working on a metal pedestrian bridge across an Amsterdam canal that will be printed in situ by robotic arms.

Three years ago Chinese materials firm Yingchuang New Materials demonstrated the ability to produce an entire house made from 3D-printed concrete. In just one day the machine made 10 frames from construction waste mixed with cement, although the roofs had to be added separately. 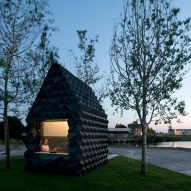 Last summer Dutch studio DUS Architects created a 3D printed micro-home cabin complete with a bathtub from sustainable bio-plastic that they hope could be used as shelters for disaster relief programmes.

Architects and designers have been applying 3D printing technology to a huge range of materials since the technology became available. The University of Hong Kong recently built a pavilion to show of the potential of 3D-printed terracotta bricks.

Australian designer Tom Fereday and artist Susan Chen collaborated on a lampshade made from a single continuous coil of ceramic that takes just two and a half hours to print. 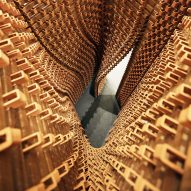