It's inexcusable for architects to create CGIs that don't reflect the social demographic of the area they are designing for, says Margaret Ravenscroft.

Diversity in architecture is an issue. The surveys show it, the demographics show it and the computer-generated images show it.

A recent visualisation published in the Architects' Journal showed 36 people and only one was a person of colour. This was for a scheme in a London borough that is 48 per cent non-white.

These inaccurate and offensive misrepresentations show future cities as homogeneous spaces, where whiteness is omnipresent and people of colour are erased. They are symptomatic of the institutional bias in the architecture industry and they perpetuate lack of inclusion and unfair treatment. All of us who produce, use and even consume visuals must affect change by setting a standard for realistic representation when it comes to diversity.

Last week on Twitter, I provocatively called for architecture and design trade press to boycott the use of images that do not show fair and diverse representation of the places the CGIs depict.

While many agreed with the sentiment, there were, unsurprisingly but nonetheless disappointingly, others who felt that racial representation is not important, nor does it lead to disadvantage.

This is not a backseat issue to other "more important" matters, as one tweeter suggested. Interestingly, not only one wrong can be righted in the world at any given time.

Another tried to justify the exclusion of people of colour by saying there isn't time to put in the necessary efforts. This is a bad excuse for doing your job carelessly. And it's culturally insensitive.

It's also lazy for your cutout library to solely consist of free downloads from super-Scandi-white Skalgubbar, and for you to use them indiscriminately without considering the context of place. It's ignorant for designers to not know the local demographic of the area they are designing for. It's apathetic not to care. Overall, it's structural racism.

By not including people of colour in architectural visualisations, we are not only writing them out of our future spaces, we are suggesting they never belonged in the first place

With my provocation, I wasn't calling for censorship; I was making a point. The widespread whiteness in our CGIs is both a clear reflection of the people making the renders – we are an undeniably white industry (89 per cent in the UK) and we're producing images that reflect that – and a historic, ingrained, subconscious issue that believes whiteness is more worthy.

Racism isn't just spewing the N-word. It's historic and institutional systems that are set up as disadvantageous to people of colour. It's also a white person refusing to listen to people of colour who say their lives are affected by these systems.

A separate splinter of the responses were grievances about CGIs unrelated to the erasure of BAME folks, particularly regarding daylight/sunlight inaccuracies. This pivot by white people away from challenging conversations about people of colour is yet another symptom of structural racism. 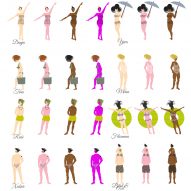 By failing to represent diversity in design CGIs, we are normalising whiteness and othering everything else. And in our industry, by not including people of colour in architectural visualisations, we are not only writing them out of our future spaces, we are suggesting they never belonged in the first place.

While the UK is majority white, it has a rich mix of diversity and multiculturalism that should be accurately portrayed – and accuracy is key. It would be all too easy to cut out and chuck in people of colour to diversify a visualisation, but representation needs to be considered and fair. Commodifying diversity to make a place look "exciting", impress planning authorities or make a sale is yet another enactment of structural racism.

Institutional racism and fetishisation aside, it's essential to know and properly depict the local demographic in architectural visualisations. If architects are going to bang on about site context, drawing zigzagging rooflines and naming every converted warehouse-turned-office space after the former biscuit factory that once stood in its place, then they surely should be thinking about social context too. Who is using this space? What are the challenges our designs can help them overcome?

For practices and individual visualisers, simple processes can be put into place to check fair representation of demographics, including age, race, ability and orientation. At our studio, we've started having conversations about our historic shortcomings. Below are suggestions, based on ideas for progress that we've explored:

› Self-assessment and commitment to progress is important. Review your past CGIs and with a quick ONS search, update accordingly.

› Build up your library. Try Just Not the Same or Mr Cutout, or one of the many others. It may take time to sort through this content, or to do your own cutting, and in some cases it could cost a small amount money, but we need to do the work toward equality. You could also rethink your aesthetic and go graphic or minimalist. This helps with copyright issues as well as those of representation.

› Make sure the project architect takes the 10 minutes needed to explain site and social context to the visualiser. Then, end the process with a check. Before you hit send or submit, task someone with reviewing the visualisation and asking, have we fairly represented the demographic of the location in which this project sits?

If we can't visualise our future spaces fairly, how can we be trusted to create them that way?

In her book, Why I'm No Longer Talking to White People About Race, Reni Eddo-Lodge writes: "When white people pick up a magazine, scroll through the internet, read a newspaper or switch on the TV, it is never rare or odd to see people who look like them in positions of power or exerting authority. In cultural particularly, the positive affirmations of whiteness are so widespread that the average white person doesn't even notice them. To be white is to be human; to be white is universal. I only know this because I am not."

This shouldn't have to be said: we need to treat people of colour with the same respect and afford them the same spatial opportunities as white people.

If we can't visualise our future spaces fairly, how can we be trusted to create them that way?

Margaret Ravenscroft is a doctoral candidate at Nottingham Trent University, researching representations of place in film and literature by forced migrant women. She completed her master’s degree in Aesthetics of Kinship of Community at Birkbeck, University of London. She is also head of communications for Coffey Architects.
Read more: