Shreds of rattan, chutes of bamboo and offcuts of wood have been used throughout this hotel in Zante, designed by Block722 Architects to blend into the Grecian landscape.

The Olea Hotel is perched on a hillside in Tsilivi, a small coastal village recognised for its rugged mountains, picturesque beaches, and abundance of pine forests.

At the centre of the site – which has a spa, three restaurants, and 93 guest suites – lies a huge, "lake-like" pool that measures 4,000 square-metres.

This, alongside elements of the surrounding landscape, heavily influenced the aesthetic of the hotel's interiors, which were also created by Block722 Architects.

The practice – that has offices in Athens and Stockholm – were approached by hospitality group Xenos Hotels to complete contemporary guest rooms in natural materials, integrating the guest accommodation into wider terrain "without a sense of superficial interference".

"The most important thing to us is how the guests would experience their surroundings," the practice told Dezeen.

"The design aims to bring guests in sync with nature and its elements, connecting the indoors to the outdoors in a seamless way that helps them unwind and explore the resort in its entirety."

Each of the rooms is set within a rectilinear volume and fronted by large windows, which frame different views of the pool, gardens, or distant Ionian Sea. Walls have been covered with sand-coloured plaster, complimented by earthy-hued bed linen and light timber furnishings. 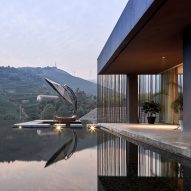 Rough planks of oak wood have been used to form counters in the bathroom, which are topped by chunky stone wash basins.

Vistas are further amplified in one of the hotel's eateries that features open walls – shade is created for diners by full-height bamboo screens.

Textural interest is created by shredded rattan that has been used to line the ceiling.

Greenery has been introduced at several points, including mature olive trees that overhang groups of sun loungers and tropical plants that appear behind the reception and bar areas.

Much like Block722 Architects, Studio8 referenced the landscape of eastern China for the design of the Anadu Resort hotel, which has slate-grey rooms to mimic the appearance of mountains and jade-tinged furnishings that echo the colour of tea fields.