American studio Rowland + Broughton has overhauled a 1960s house in Aspen, Colorado, to offer occupants a better connection with the mountain landscape.

Ridge House is situated on an 8.5-acre (3.4 hectares) site overlooking the Rocky Mountains. It is accessed via a long driveway that curves through the undulating terrain and passes through a grove of aspen and oak trees.

The clients wanted better views of the landscape, as well as better sight lines between the rooms of the 1968 property. They also asked for spaces where they could display their collection of contemporary artwork.

Rowland + Broughton, which has offices in Aspen and Denver, sought to achieve this in "a thoughtful blending of old and new."

"Modern architecture mixed with curated details allows for a layering of history and a connection to the ranch-like character of the site," said the team.

The home's structure consists of glue-laminated timber and steel columns. On the exterior, the west elevation is sheathed in dark metal siding and large expanses of glass, which usher in daylight while also affording generous views of the terrain.

On the east facade, original stone cladding had to be replaced due to water issues within the wall. The team used textured, Appalachian grey sandstone, which visually draws references to the surrounding topography.

"Sets of staggered, remnant stone walls run in a single direction, allowing light and landscape to slip past," the team described.

Encompassing 8,250 square feet (766 square metres), the home is composed of rectilinear rooms that are organised along a central spine.

Occupying the centre of the home is the communal zone.

The kitchen features a cosy fireplace, stainless-steel appliances and cabinetry faced with cold-rolled steel. The kitchen steps down to a light-filled living room, where a stone fireplace with a built-in wood store acts as a centrepiece.

The south end of the home contains an expansive master bedroom suite with an original wood-burning stove, which was restored.

The north side is occupied by guest quarters and two kids' bedrooms. A third children's bedroom is situated in a small, upper-storey volume.

Throughout the dwelling, the team used earthy materials, such as reclaimed white oak and different variations of sandstone. Studio B wraps elevated Aspen home in zinc and glass

Rooms are fitted with contemporary decor in neutral colours, helping create a serene atmosphere, while floor-to-ceiling glass and sliding doors provide an intimate connection to the scenic landscape and vast blue sky.

A mecca for both skiers and cultural aficionados, Aspen is a popular spot for modern architecture.

Other recent projects in the mountainous area include a spacious residence by CCY Architects that features timber-clad boxes linked by glazed bridges, and a dwelling by Studio B that consists of zinc-clad boxes resting atop a concrete plinth.

Photography is by Brent Moss. 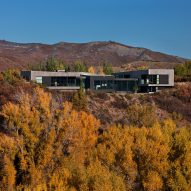