Randy Bens developed the shape and form of the two-storey residence for a slender site, measuring 20 by 200 feet (six by 60 metres) – proportions that Falken Reynolds described as "typically the size of a back lane".

Clad in pale grey metal panels, the building runs nearly the full length of the site – except for a back garden. There is also a small yard cut into the centre.

Falken Reynolds' role was to ensure that despite the unusual dimensions, the interiors of the home still received plenty of light. The firm therefore planned the interior walls, ceiling heights and shapes, and openings to this effect.

The studio – which is led by Chad Falkenberg and Kelly Reynolds – also added 11 skylights of varying sizes to the roof, complemented with the placement of artificial lighting.

"Light was probably the biggest driver of decision making as we developed the design," Falkenberg told Dezeen, "using 11 skylights to bring in natural light through the upper floor, and architectural lighting in the skylight wells, and other ceiling coves to create gentle diffused light and balance the directional lighting."

The two firms completed Saint George House as a speculative home – a property built to be sold – for local builder Moosehead Contracting, so there was no particular resident in mind.

Falken Reynolds chose to create a simple aesthetic to suit the type of client who would typically live in the area. The studio said the blend of pale wooden details – including furniture and windows frames – with white and grey draws on both Nordic design and Canadian West Coast living. They therefore described the aesthetic as "Canadian Nordic".

"We imagined the future homeowner to be a design-savvy working professional, possibly with young children, which is a very common profile of people moving into the South Main neighbourhood in Vancouver," said Falkenberg.

"The concept started with a space plan for a casual and active Canadian West Coast lifestyle and mixed that with a palette of a light, Nordic elements: light oak, white, and accents of grey and black."

An open-plan living, kitchen and dining room occupies the rear of the ground floor. Sliding glass doors open onto a decked patio in the garden, which is covered slightly by the overhanging level above. 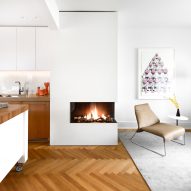 A small shed at the far end of the yard is clad the same metal as the residence, and provides a playroom for children.

White cabinetry with wooden details lines the kitchen, which is also fitted with a grey stone fireplace and counters to follow the theme of the project. Other features include slender white slats that form coat hooks along one wall.

Bolder tones adorn the lounge, such as a blue L-shaped corner sofa and colourful cushions, to show that the neutral finishes can acts as a backdrop for either "a quiet or bold personal taste".

The dining area occupies the area where the floor plan narrows, to accommodate the courtyard on one side, with a set of sliding glass doors opening onto the outdoor area. A pendant light made of pink balls hangs above the pale wooden table.

A bench covered in grey material is built into the wall on one side, while curved wooden chairs with leather seats are placed on the other.

Behind the table, a wooden staircase leads up to the first floor. White slats run up one side to form the balustrade.

Similar finishes continue on the upper level, which is divided the floor into two parts, separated by the central void created by the courtyard below.

At the front is the master bedroom and bathroom, while the two children's bedrooms with a second bathroom in-between occupy the other end.

Falken Reynolds was founded in 2012, and has previously completed a renovation of a townhouse in Vancouver that fuses contemporary and historic details.