US studio Edmonds + Lee has modelled the lobby inside this residential building in San Francisco on a cosy mid-century living room, including a huge, metal-clad chimney, wooden panelling and a weathered rug.

The Austin is a 100-unit residential building, comprising three stepped, glazed volumes encased with white frames. It was designed by local firm BDE Architecture in an upcoming "trendy industrial" area, located at the edge of the city's Lower Pacific Heights and Nob Hill neighbourhoods.

Edmonds + Lee, which is also based locally, was enlisted to design the interiors – including the 100 residences, a lobby and a mail room – and opted for a warm and cosy material palette to contrast with the glass exterior.

Wood, brown leather and earth-toned metals feature throughout the main communal lobby, where residents are encouraged to relax. The styling draws on "the architectural idea of California organic modernism" – an aesthetic popular in the mid-20th century, which involved finishes that blended with the natural environment.

Wooden panels cover the floor, while more woodwork lines the walls in various slatted patterns. For example, slim planks of white oak are slotted in between plain wood on one wall. 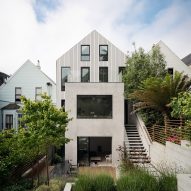 Complementing these golden hues, brass-toned metal clads the oversized fireplace in the centre. The architects chose the metal to reference the history of the site, which was formerly a car repair shop.

Homey furnishings include a leather bench draped with a fluffy white rug, and matching chairs, a blue sofa and a pair of wood-framed chairs. All are arranged around a pair of wooden tables, and set over a patterned rug that appears to be worn down.

A similar arrangement features on the other side of the room, where views to a garden outside are offered through large windows.

Other seating include a grey L-shaped sofa placed in a corner, offering a more secluded spot. Latticed black pendant lights hang above.

A long bench covered in beige leather runs along another wall. Storage is fitted into the slatted wood behind.

Also in the room, a tall wooden table with stools placed around provides a desk for residents to work at.

In contrast, Edmonds + Lee completed the mail room in a monochrome palette. Grey oak covers the floors, black mail boxes wrap around "like a ribbon", and cove lighting brightens the white-painted walls.

"Anchored by a soaring soft white ceiling and the subtle texture of oak plank floors, it's both decadent and minimal, bringing a warmth of tone and design to modernism," said the firm in a project statement.

A similarly neutral palette decorates the residences, which range in size from studios to two-beds.

Each has an open-plan kitchen, dining and lounge for entertaining, which are naturally lit by the building's large windows. The structure's thick concrete columns are left exposed and punctuate the spaces.

"The heavy concrete columns that make up the interior structural support also act as both a visual and spatial element in the homes, hinting at separations in programme, while drawing all the focus to the expansive city views just past them," said the firm.

The Austin also includes a roof deck, with sofas placed around fire pits, and a pet spa.

Edmonds + Lee was founded by Robert Edmonds and Vivian Lee, who met while studying architecture at Columbia University in New York.

Among the firm's previous projects are several residences in San Francisco. These include the overhaul of a slender Victorian home, a house featuring large windows and white-washed interiors, and a property with a bright white facade and a slanted roof.