Artist Helen Musselwhite explains the paper installation she made for T2's Regent Street shop window during London Design Festival, in this movie Dezeen produced for the Australian tea brand.

Musselwhite, a Manchester-based artist who works exclusively with paper, has created a colourful arrangement of objects and fruit to present T2's teas and teaware.

T2, which specialises in loose-leaf teas and accompanying tea wares, had asked the artist to reinterpret its tagline Tea Reimagined with an installation to display in the window of its Regent Street store throughout London Design Festival next week.

Musselwhite turned to the brand's products for inspiration when designing the piece.

"I've drawn from T2's extensive library of teas and teaware and I've reproduced them in paper form," she says in the movie, which Dezeen filmed at the artist's studio in Manchester for T2.

"I've taken four kinds of tea from around the world," she explains. "I've got a chai pot, there's a Japanese tea pot as well as your traditional English teapot, and there's matcha tea coming out of a matcha bowl."

Flowing from each of the teapots are cascades of tea, cut from different colours of paper.

"The paper tea tumbles into this giant teacup surrounded by lots of ingredients from the teas," Musselwhite explains.

Among the ingredients decorating the base of the piece are a huge lemon slice, a watermelon, blueberries and cranberries, as well tea leaves.

The items of teaware that appear in the installation are based on T2's products.

"All the teawares are taken from T2's extensive catalogue," Musselwhite says. "They're all really brightly coloured, they're design-led, and really inspiring to remake from paper." 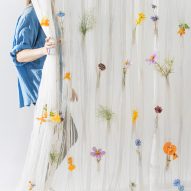 "I really love using their paper," she says. "It's really rich, they're really saturated colours, and it comes in a really good range of weights."

The artist claims that she favours working with paper because of the potential for creativity the material holds.

"I love the idea that a humble piece of paper can be anything that you want it to be," she says. "You just need your imagination to turn it into anything you like."

Musselwhite's installation for T2 will be on display at 292 Regent Street in London from 17 to 22 September during London Design Festival, alongside a display of limited-edition T2 packaging based on the paper artwork.

This movie was filmed by Dezeen in Manchester for T2.