Infiniti has unveiled its latest Prototype 10 concept car, which aims to bring the classic speedster into the electric era.

The Japanese automaker "looked back to go forward" with its vision for the single-seat Prototype 10, which reimagines the early Californian speedster model with a "cool, clean and forward-looking design".

"The Infiniti Prototype 10 echoes the layout and design of some of the most evocative car designs of all time, where power was celebrated through high-powered single-seat competition cars," said the brand.

"Our new concept speaks of an electrified future, something which is reflected in its form and details," it continued. "It is appropriate that we found inspiration in an optimistic bygone era in which cars were characterised by the simple love of driving."

Featuring a fully electric powertrain and a single-seat cockpit, the new model exhibits Infiniti's driver-focused design approach, which focuses on "the simple love of driving" to deliver a luxury experience.

"This idea of 'looking back to go forward', and combining the inspiration of an earlier aesthetic with future technology, lets us show how excited we are about the era of electrification," said executive design director Karim Habib.

"Prototype 10 draws on some of the most iconic and evocative car designs of all time to illustrate this excitement."

The concept car was revealed on 23 August at the Pebble Beach Concours d'Elegance in California. 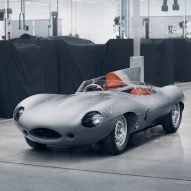 Inspired by the ancient art of Japanese paper folding, the exterior 3D body structure boasts an origami-like aesthetic, achieved by "coaxing the aluminium as if it was Japanese paper."

"Paper folding was developed in China 2,000 years ago. By the seventh century it had travelled from China making it to Korea and then Japan," explained the brand. "It was first practiced in the Japanese Imperial Court where it was considered an amusing and elegant way of passing the time."

"With our new Infiniti electrification design language taking shape on a few projects in the studio, we wanted to reflect and seek an inspired and elegant way of passing the time at Pebble Beach," it continued.

With plans to electrify all of its new production cars from 2021 onwards, Infiniti's Protoype 10 is a taster of things to come for the brand's future design language.

"We all feel a certain degree of passion when talking about roadsters and speedsters," said Infiniti president Roland Krueger.

"We are equally passionate about the potential that electrification holds for the future of our cars – a daring speedster is the perfect study for our designers to explore an electrified future and ignite such excitement," he added.

Founded in 1989, Infiniti is the luxury vehicle division of Japanese automaker Nissan, which recently developed a new technology that allows vehicles to read the brain activity of drivers, and initiate movement in response.