Photographer Marc Goodwin has captured a set of construction images of PES Architects' Strait Culture and Art Centre, which is nearing completion in Fuzhou, China.

Due to open later this year, the centre is described by the Helsinki- and Shanghai-based studio as a "cultural shopping mall" that will offer the city's residents cultural programmes alongside commercial and family-oriented entertainment services.

The Strait Culture and Arts Centre is located in Mawei New Town, facing the Minjiang River. The large complex is divided into five smaller units which are conceived as the petals of a jasmine blossom, the city flower of Fuzhou.

The five jasmine petal venues include an 1,600-seat opera house, a 1,000-seat concert hall, a 700-seat multi-functional theatre, an art exhibition hall and a cinema centre. All five are linked by a concourse and a large roof terrace with public services and commercial and leisure facilities.

Goodwin was given a tour of the building site by an architect who also walked him around an old, crumbling neighbourhood that sits just opposite.

From here it was possible to get some shots looking back at the site from across the river, but when it became clear that photography was not welcomed by locals, they moved on.

"The construction was just as vast as imagined, and even more labyrinthine to navigate," recalled Goodwin.

"Everywhere I looked, sparks were flying from welders. Workers would pop out of the shadows as I wandered around the basement levels, certain I would never find my way out again."

"At this stage, the project felt like an emerging Sydney Opera house outdoors, and a coal mine below," he continued. 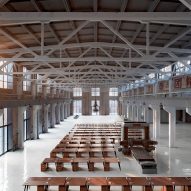 "The vastness became even more apparent when we drove around town looking for vantage points across the water, such as the one taken in a gap between two sides of a bridge being constructed at breakneck speed."

The images show the complex steel skeleton of the centre's curvaceous petals and in places the white ceramic tiles and louvres being applied as it reaches the final stages of construction.

Goodwin was also able to capture some images using a drone which show the huge scale of 153,000 square metre project.

"I could really only take the project in once we started flying the drone around with one of the architects on site," he said.

"The beauty of it's forms emerged from beneath the scaffolding, detritus and hurlyburly of an army of workers. To this date, I've never had an experience that compares to this, and I can't wait to return to see the finished project this autumn."

Ceramic is being used as the project's main material due to its significance in the historical context of the maritime silk road trade connection between China and the rest of the world. PES Architects enlisted Taiwanese ceramic artist Samuel Hsuan-yu Shih to design the centre's ceramic interior according to acoustical demands. 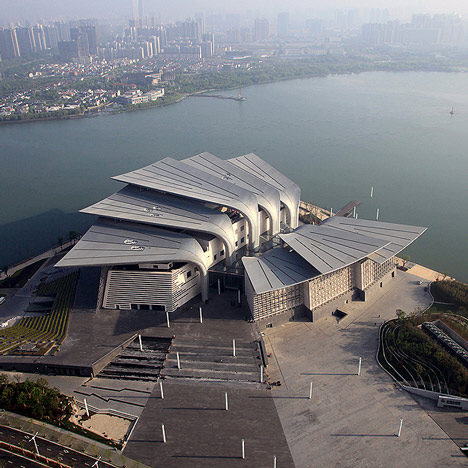 PES Architects has operated in China since 2003 and opened its Shanghai office in 2010. The firm won a competition to design the Strait Culture and Art Centre in 2014.

Most recently he photographed a historic factory in Changzhi, China, which had been saved from demolition by Hong-Kong-based architecture studio Superimpose who renovated it into a exhibition centre for the city.