American artist Phillip K Smith III has installed coloured lights along a skybridge in Detroit, which illuminate in various gradients and patterns at night.

The 100-foot-long (30-metre) bridge was designed by Gino Rossetti of local firm Rossetti Architects in 1976, to connect the 16th floors of the Guardian Building and One Woodward.

Based on the modernist aesthetic of the latter, completed by American architect Minoru Yamasaki in 1962 and featuring a white concrete facade, the skybridge is formed of a simple shell with windows running along each side.

Smith's intervention involved adding LED lights behind the translucent panels, so they shine through as blocks of colour. 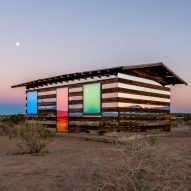 The lights are programmed to change in patterns, creating the impression that the hues are moving along the length of the bridge. Single-colour bars and rainbow effects are also among the configurations.

Smith described the project as "a beacon for the beauty, creativity, and innovation of Detroit".

It was completed with the help of local gallery Library Street Collective, and supported by Bedrock Detroit, Quicken Loans Community Fund and Wayne County.

"Detroit Skybridge is an example of how under-utilised spaces can be reimagined for the benefit of the public," said Anthony Curis of Library Street Collective.

Smith is best-known for his use of mirrors and colourful lights to create installations, which are often located in the desert landscape near his home and studio in Palm Springs, California. These have included a cabin camouflaged with mirrored bands, an arc of reflective poles, and a collection of light-up blocks at Coachella festival.

The skybridge is one of the few projects that Smith has designed for an urban site, although earlier this year he placed a curved mirror wall inside a historic Milanese palazzo as part of a commission from clothing brand COS.

"Smith is drawn to sites where he can engage directly with the existing beauty of the surroundings, whether that is on the edge of the ocean, the middle of the desert, or in the midst of urbanity," said a statement from Library Street Collective.

Detroit has become a hub for art and design thanks to regeneration efforts, which have taken place over the past decade after the city was almost deserted when its motor industry declined. Other installations there have ranged from a mobile DJ booth modelled on a UFO to an abandoned suburban home covered in ice, and a maze of ultra-violet wool thread.

Photography is by Lance Gerber, courtesy of the artist and Library Street Collective.