Venturi's death on Tuesday 18 September 2018 was announced in a statement from his family.

"Robert Venturi, one of the world's leading architects, has died at the age of 93," said the statement. "He passed away peacefully at home on Tuesday after a short illness. An expanded statement about Bob's incredible life will be coming in the next few days. For now, Denise Scott Brown and James Venturi have asked that we respect their wishes for privacy while they grieve."

Venturi wrote seminal texts including Complexity and Contradiction in Architecture, and Learning from Las Vegas (with Scott Brown), which challenged many of the principles of modern architecture, and subsequently signalled the dawn of the postmodern era in the second half of the 20th century.

He coined the maxim "Less is a bore", as a play of Ludwig Mies van der Rohe's modernist mantra "Less is more".

Venturi was awarded the Pritzker Prize – considered architecture's highest honour – in 1991, and campaigned for Scott Brown's contribution to his oeuvre be recognised by the jury in 2013. The efforts were unsuccessful, but duo jointly received the AIA Gold Medal in 2016.

The couple founded and ran Philadelphia-based Venturi Scott Brown Architects (VSBA), which completed projects including the Sainsbury Wing at the UK's National Gallery and the Seattle Art Museum, but Venturi retired from the firm in 2016.

His most famous works include the Vanna Venturi House, which he designed for his mother in Philadelphia in the late 1950s; a fire station in Columbus, Indiana, completed in 1967; and the 1992 Children's Museum of Houston.

Born in 1925 in Philadelphia, Venturi studied at Princeton University before working in the offices of Eero Saarinen and then Louis Kahn. He met Scott Brown in 1960, while both were on faculty at the University of Pennsylvania, and later held teaching positions at Yale and Harvard. 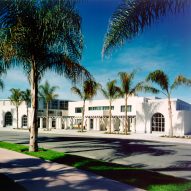 Tributes are pouring in from across the architecture community on social media. Among the first to respond to the news was British architect Charles Holland, whose former studio FAT followed many of postmodernism's principles.

"Very sad to hear of the death of Robert Venturi. He was without a doubt my favourite architect," he said on Twitter. "He opened my eyes to classicism, mannerism, complexity, tension, beauty and the sheer aesthetic thrill of great architecture. He was also a kind, witty and lovely man. RIP Bob."

Critic Alexandra Lange tweeted an image of the floral facade that VSBA created for the Best Products showroom in Pennsylvania in 1978, describing it as "Always and forever, one of my favorite architectural things".

Writer, author and critic Paul Goldberger added: "I am heartbroken to learn of the death of Robert Venturi. Writing about him and Denise Scott Brown was the beginning of my career as an architecture critic."

Although Venturi's importance to 20th-century architecture is irrefutable, many of his and Scott Brown's ideas proved divisive, and several of their buildings are currently under threat. The most recent is the Museum of Contemporary Art San Diego – parts of which will be demolished to make way for an expansion by Selldorf Architects.

A petition to prevent the alterations amassed signatures from over 70 architects, critics and preservationists.

Portrait of Robert Venturi and Denise Scott Brown is by Matt Wargo, courtesy of VSBA.