IKEA's innovation lab Space10 explores the potential of autonomous vehicles to take on new uses, with seven concepts that include a mobile cafe and a farm on wheels.

Space10 worked with visual trend lab Foam Studio to explore how self-driving cars could impact our everyday life once they become ubiquitous. They designed seven mobile, purpose-built interior spaces: an office, a cafe, a healthcare space, a farm, an entertainment unit, a hotel and a pop-up shop.

The project, called Spaces on Wheels, imagines that autonomous vehicles could support everyday activities, while still transporting users from one place to another.

Electric and driverless, each of the seven spaces would be available on demand via a Space10 app, where users could order a vehicle and explore each of the spaces via augmented reality on their phone.

"We are on the verge of what could be the most significant period of change in the automobile industry," said Space10 co-founder Kaave Pour. "Technologies like electrification and automated driving are making notable progress."

"One day, in the not so distant future, fully autonomous vehicles could be a common occurrence on our everyday streets. This would not only redefine how people and goods move around our cities, but also redefine the very fabric of our daily lives," he continued.

Space10 hopes that Spaces on Wheels will enable people to easily envision what life could be like once self-driving cars become the norm.

According to Foam Studio founder Henrik Mauler, they wanted to design vehicles that felt approachable, human-centred and welcoming. 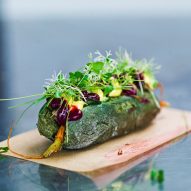 "The day fully autonomous vehicles hit our streets is the day cars are not cars anymore. They can be anything," Space10's co-founder Simon Caspersen told Dezeen. "The primary function of transportation disappears to give rise to other functions."

"It could be an extension of our homes or our offices or our local cafe, so we want to trigger a broader conversation on what we would like it to be," he continued. "Maybe one day, IKEA's expertise in home furnishing and small space living could find a whole new stage to thrive on – on wheels."

According to the lab, the average person driving to work in a busy city spends 75 minutes commuting, with 30 of those minutes lost to congestion. This means that over 32 years, the driver will have spent two years stuck in traffic.

The Office on Wheels is designed to offer a flexible, portable workspace, to help people reclaim some of the time lost when commuting in congested cities – whether this be making a head start on the day's work or having an early meeting.

The Cafe on Wheels allows people to fit in time to catch up with friends over a coffee when they need to keep moving, while the mobile healthcare space enables medical professionals to come to you on demand rather than the other way around.

A portable farm mobility concept provides fresh, local and healthy food to people in any location, also allowing farmers to expand their businesses.

Another concept is the Play on Wheels, which uses augmented reality windows to allow people to either play video games in AR as they travel, or access educational content that responds to and reflects their surrounds.

Other vehicle designs include the electric Hotel on Wheels, designed as an eco-friendly alternative to air travel to take people to their destinations while sleeping, and the Shop on Wheels, allowing people to shop without the hassle of travelling to retail locations, or ordering online.

"Google 'car of the future' and you'll get a slew of images straight out of science fiction: sleek, sterile, chrome painted machines. We propose an alternative to this, because we believe that those who imagine the future often end up shaping it," said creative strategist Bas Van De Poel.

"This is our contribution to the conversation around the future of urban mobility. Autonomous vehicles shouldn’t, however, be seen as the silver bullet, far from it, as we generally need cities that prioritise pedestrians, bikes and public transportation much higher," he continued.

While the seven vehicles are just concepts for the time being, Space10 hopes it can start a dialogue about what city dwellers would like their future urban environment to look like.

"We don't have ambitions of manufacturing cars, but in a future where people no longer have to worry about driving, vehicle interiors can expand to a point where we are no longer designing cars, but rather small spaces," said IKEA's concept innovation manager Göran Nilsson.

Space 10 is currently exploring a range of futuristic concepts. It recently looked to the future of food by coming up with five new dishes that could offer the answer to the predicted global food crisis, including a burger containing mealworms and a hot dog made from dried carrots and algae.