Seven designers and studios from Uruguay have created a series of furniture that draws on the legacy of one of the country's best-known architects.

The designers were all asked to respond to the work of modernist architect Julio Vilamajó. The results are on show at the Aram Gallery for London Design Festival, in an exhibition titled Hilos Invisibles, meaning invisible threads.

The nine pieces of furniture, which include a leather-covered banquette and a mirror-drinks cabinet hybrid, are displayed alongside commissioned photography of each item taken in front of a brutalist building by Vilamajó.

Exhibition curator Matteo Fogale hopes the project will shed light on both the upcoming Uruguayan design scene and an often-overlooked South American architect.

The seven studios that he approached to work on the project are Menini-Nicola, Rafael Antía, Claudio Sibille, Estudio Diario, Carolina Palombo Piríz, Muar and Estudio Claro.

Fogale met them all last year at designjunction, a London Design Festival venue, where they were showing together. "That's what I liked about it, there are just a few of them, so they do everything together as a group and collaborate a lot already," Fogale told Dezeen.

Initially the group conducted a series of workshops at Vilamajó's former home in Montevideo to experiment with how they might create work drawing on the architect's output.

Then Fogale gave each studio a drawing from Vilamajó's archive, which was maintained by the carpenter who made the furniture for the architect's projects. He discovered the archive on a British Council residency based at the house last year.

"I didn't pick drawings of furniture itself because I didn't want the pieces to be inspired by a piece of actual furniture," said Fogale.

Instead the design studios picked up on small details of the sketches and used these as the jumping off point for their work. The original drawings are displayed alongside the furniture they inspired.

Many of the pieces, such as the Tutura chair by Carolina Palombo Piríz feature natural materials – something Fogale thinks is common to much design from the region. He defines Uruguayan design as being a mix of the European influence of the modernists, with a South American mix.

Fogale left the country at the age of 17 to study in Europe, so relied on the design studios to direct him towards the best producers and to offer in-depth knowledge about the possibilities of production. 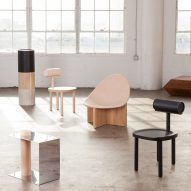 "I wasn't sure if they were producing their pieces in Brazil or somewhere, so I was surprised that they made everything in Montevideo. I found it amazing that all these craftsmen were maximum an hour from the city," he said.

Fogale encouraged the studios to be "open-minded" and approach the project as a "creative exercise" rather than a commercial venture. "I wanted them to forget about numbers and create a unique piece with a sculptural character that would have the important function of storytelling," he said.

The texture on the Medianera Lamps by Estudio Claro was inspired by the small textured brick feature on the facade of Vilamajó's house. The architect played a lot with light and shadows, and the studio kept this in mind when designing the series of three marble lights.

The house contains a lot of mirrors – Vilamajó was very interested in the idea of reflections. Menini-Nicola played around with this idea when producing the mirrored piece, called El Secreto, a lozenge-shaped mirror in glass, steel and Paraguayan Petiribi wood. Vilamajó was also a big drinker, so the mirror spins around to reveal a small bar.

The other items on display are a low concrete and glass table by Rafael Antía, a veneered dressing table by Muar, the blue leather banquette by Estudio Diario and angular shelves by Claudio Sibille.

The exhibition also includes archive material about Vilamajó's involvement in the workshops for designing the new UN buildings in New York, just before his death in 1948, and about his house in Montevideo. Fogale gathered material from street markets, online auctions and bookshops, which is displayed alongside the furniture itself.

He hopes that the exhibition will encourage people to think about Uruguayan design differently. "Uruguay is a small nation, but we're more than just football and marijuana!"

London Design Festival runs from 15 to 23 September, although Hilos Invisibles continues until 27 October.

Other exhibitions at London Design Festival include a display of pieces by Japanese metalworkers at Japan House, and a series of jesmonite furniture by Malgorzata Bany at The New Craftsmen.