The former Philips power plant in Eindhoven has been transformed into an innovation hub by young architect Janne van Berlo, in a renovation that celebrates the building's industrial features.

It occupies an iconic building that once provided Philips factories with power generated by coal, gas and oil.

The building now accommodates around a dozen businesses. One of the main aims of the design to create an ecosystem that would allow these companies to communicate, interact and share facilities.

"It was very important to create a building with a very open atmosphere that encourages people to collaborate and run into each other regularly," Janne van Berlo told Dezeen.

During research into other refurbished multi-tenant buildings, the project team found that navigation is a common issue and that internal compartmentalisation can lead to some businesses being tucked away in forgotten corners.

To avoid this potential pitfall, the design is centred around a communal street-like passage that extends from one end of the building to the other. All of the offices are arranged along this central passage and their glazed walls help to enhance the feeling of connection between the various tenants.

The double-height, five-metre-wide corridor allows natural light entering through skylights to illuminate the centre of the building, which would otherwise have been too far from the facades to receive an appropriate amount of daylight.

The skylights also cast light onto the original concrete framework, as well as features including coal chutes suspended from the roof that preserve a sense of the building's industrial past.

"We love this raw industrial look," Van Berlo added. "It's the jewel of the building so we wanted to keep it visible as much as possible."

"It gives you a sense of history as well as future possibilities. It also creates a playful atmosphere that you need for people to feel creative and inspired."

In addition to opening up the roof to provide more daylight, the architects also punched small holes into the existing brick facades to increase illumination levels within the offices, while minimising disruptions to the historic surfaces.

At the rear of the building, a glass extension follows the lines and rhythm of the existing structure to ensure visual consistency between the old and new sections.

Glazing throughout, the project was carefully considered to achieve continuity with the older openings.

Some of the steel window frames were renovated and updated with new glass, while new windows feature frames concealed in the surrounding brickwork to express their modernity. 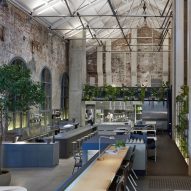 Several of the contemporary interventions are based on parts of the original design that were never built, including a steel vertical garden which completes the symmetrical form as it was initially intended.

The new addition contains meeting rooms, a glass elevator and emergency exits in a delicate transparent box that contrasts with the existing monumental structure and hints at the transition towards more sustainable energy production.

The original power station was built in four stages between 1953 and 1972 on a site known as Strijp-T in the heart of the Brainport industrial area.

After ceasing operation and being occupied by other tenants, the plant gradually fell into a state of disrepair and was taken over by the local municipality, which placed it on a list of buildings to be demolished.

It was industrial design company VanBerlo that spotted the opportunity to repurpose the building as creative offices and spent four years lobbying to prevent its destruction.

The company is now the core tenant of Innovation Powerhouse, which is owned and operated by commercial developer GEVA. It was also behind the decision to give young architect Janne van Berlo, daughter of the VanBerlo founder, the opportunity to work on the project, rather than give it to a high-profile studio.

It is her studio's debut project.

Similarly, Australian studio DesignOffice recently converted a former power station in Melbourne into a cafe and restaurant with exposed brickwork and abundant planting.

Photography is by Tycho Merijn.