The collaborative project resulted in a series of five graphic fabrics designed by Dixon and developed by Kirkby Design, which feature bold prints of foil, fibrous hair, two types of marble-like stone – one brown and one grey – and charred wood.

The studio chose these specific textures for their visual connection to the style adopted by Dixon in many of his products and interior spaces, such as metallic, reflective surfaces and coloured marble.

The fabrics were displayed at an installation that took place during this year's London Design Festival as part of Dixon's Hyper Real exhibition, which explores digital manipulation of materials.

Kirkby Design's in-house studio took the images and manipulated them into a repeating pattern. They played with the scale and alignment to ensure that the overall design translated fluidly onto the fabric and could be printed without any seams, gaps or pauses.

Once the patterns were ready, Kirkby Design's brand director Jordan Mould and his team experimented with various materials such as viscose velvet, cotton, linen and silk to see which designs worked best with what fabric.

The result was a range of five designs digitally printed in the UK on two fabrics, scoured linen and velvet. The cloths were purified before printing to get rid of any imperfections that could show up due to the high graphic content of the images. 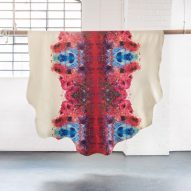 The studio then used industrial-sized inkjet digital printers to transfer the high definition images onto the chosen materials, resulting in hyper-realistic patterned textiles. According to Mould, the fabrics "look unlike anything [they] have ever produced before."

"One of the great things about digital printing is that it allows us to work on shorter print runs, which gives us more flexibility and results in less wastage," said Mould.

"We're really pleased with the result. The five designs are very graphic, which is something that Kirkby have always been known for. We have learnt a lot about digital printing in the process of this project and it has certainly furthered the studio’s horizons on working with digital prints in the future."

For instance, the wood pattern was printed on to the heavy cloth with the intent that it would be used in furniture and upholstery, while the creators envisioned the rock patterns being suitable for clothing.

According to Mould, these are materials and patterns that can't be traditionally printed on textiles, in processes such as cylinder printing, as the level of detail wouldn't be possible.

"Digital printing makes it possible to take an image of something in super high definition and transfer it onto textiles, so that it really does look like it would in real life," said Mould.

The five designs were hung, draped and upholstered in the Hyper Real installation in Tom Dixon's Coal Office Gallery, during the London Design Festival, which took place from 15 to 23 September 2018.

Also on display at Dixon's Coal Office during the festival was a digitally printed hide by Glasgow-based design studio Timorous Beasties.

The hide is part of a series that also features collaborations between leather designer Bill Amberg and Tom Dixon, Faye Toogood, Alexandra Champalimaud and Natasha Baradaran. Each designer has developed a special graphic for one skin.