American graphic designer and artist Andrew Herzog has created a 1,000-metre "walking mural" around the National Museum of Art in Bucharest, Romania.

As part of Unfinished Festival, Herzog walked in a ring around the museum, while spraying the ground with a biodegradable white paint that he mixed himself.

The work, titled Circle or Curve? is intended to raise questions about the relationship between the artist and the viewer. Herzog sees it as "an exploration of the viewer's and artist's shared responsibilities and roles in an artwork."

Neither Herzog himself, nor those looking at the work, can see the entire piece from their vantage point at ground level. They must rely on their imagination to complete the rest of the artwork in their own head. 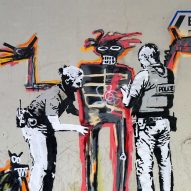 "The artist walks and draws by assessing the previous, current and future path, visualising the circle in curves before viewing it whole, photographed from above," explained Herzog.

"The artist and the viewer must enact the same process in trying to imagine where they are in the circle, how far they've travelled, and whether it even is a circle," he continued.

"Just as the artist envisioned the work partially while creating it, the viewer must also assume the responsibility of seeing the circle in parts while walking it. Comprehension of the work relies on continual assessment of the path as they walk the drawing."

His work gives viewers the tools to participate in the creation of the work and thereby to share the role of artist to a certain extent.

The tools used to produce the work are everyday items, and the processes are not complex, something that Herzog hopes will help to break down the barrier between artist and viewer. "The pieces that go about making the work are not proprietary," he explained. 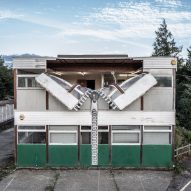 Alex Chinneck unzips the walls of a condemned office building

The paint is a mixture of calcium carbonate, a compound frequently used in farming, and water. It was sprayed on the ground using an ordinary garden spraying device, such as might be used to apply insect repellant.

"I've gone through four different sprayers to figure out which would actually work," said Herzog. "A hand pump, one with a smaller capacity, an electric version. I had to combine the right sprayer with the right mixture."

The invitation to create the work as part of the festival followed a year or so of "doing a lot of work with walking in general, trying to make something out of nothing."

He has been testing the proportions of calcium carbonate to water, the amount of paint needed for his desired effect and the paint's appearance once sprayed onto different surfaces, over the last six months.

The circle will eventually be washed away by the rain and people walking over it without any adverse effects on the environment. Herzog has no way of knowing how long this might take, and these unintended consequences also form part of the work.

"I have no interest in making something permanent unless its permanence is conceptually relevant," said Herzog. "An impermanent 1,000 metre diameter circle drawn around the National Museum of Art of Romania could even be more intriguing as hearsay than if there was permanent proof."

This work follows a previous project last December that saw Herzog collaborate with an aerospace engineer to produce a massive "drawing" made from pieces of white plastic 90 metre long laid out in a field outside Philadelphia, that could be photographed from seven and a half miles up in the air.

Herzog hopes that by undertaking this current work in an urban centre, it will engage "people who are not necessarily art goers or art viewers, but who live their lives around it."

The artwork will blend into their everyday lives as they commute, and walk around the centre of Bucharest. The appearance of a white line on the ground may prompt them to question where it came from: "If you can get people to stop and think about something, that's a success," he said.