Architecture firm Main Office has extended and renovated a residence in a Mexican surfing town to nestle among trees, plantains and ferns on a steep slope overlooking the Pacific Ocean.

The 219-square-metre house called Casa LT comprises two volumes on a hill in Sayulita – a village facing Mexico's Pacific coast that is known for its strong surf.

The project by Mexico and Sweden-based Main Office involved renovating an existing 1950s structure at the top of the slope – which was in poor condition due humidity and lack of maintenance – and adding a guest house at the bottom. Both are arranged around the existing vegetation.

"Casa LT has been designed around the living palm and almond trees, plantains and ferns that join the site's topography in playing a key role in ensuring a clear view to the waterfront from all its spaces, both internal and external," said the studio in a project statement.

The site is navigated via a series of exterior concrete stairs and terraces, with pockets of vegetation slotted between.

The main stair leads from the top of the slope around a set of trees. It then parts to flank either side of a concrete platform, which hosts a pool and sunbathing deck overlooking the ocean.

One path curves around the front of the guesthouse, before joining with the other to form a single route to the waterfront.

"The main idea of the project is to reinterpret the design parameters of the original complex and to keep the idea of a small-contained village within the site," said studio founder Dante Borgo. 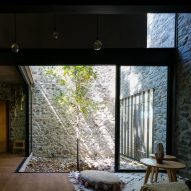 The studio chose the woodwork – which also forms slatted wall panels – for its resistance to humidity, salinity in the air and strong sunlight. It continues on the interiors with details like mirror frames, closets and sliding doors.

Inside the main two-storey property, the kitchen and open-plan living and dining area are placed on the top floor to make the most of the ocean view. Folding glass doors from the living space open onto the adjoining pool deck.

A tree at the front edge of this volume grows straight up from the lower level, where the master bedroom is located. A key feature of this floor is the concrete bathtub, cast in-situ in the en-suite bathroom.

The guest house has a bedroom and bathroom. Its full-height doors allow the facade to open entirely to makes the most of the ocean vista and lush natural surroundings.

Main Office was founded by Dante Borgo and Isabella Eriksson, and is based in Gothenburg and Guadalajara. Casa LT is among a number of its projects in Sayulita, including a recently completed residential complex, and another private house slated for completion at the end of this year.

Other residences in Mexico include Cadaval & Solà-Morales' Y-shaped Casa de la Roca, which is hidden in woodland, and a rural home in Jalisco by AM30 and Stephane Arriola that clusters around a courtyard. 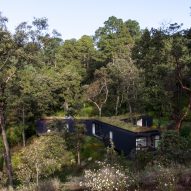