Mexican firm CDM has embedded a beachfront cabana and swimming pool into a rugged hillside covered in vegetation and overlooking the Pacific Ocean.

The project, SJA III, is nestled into a rocky hillside in the town of San Juan de Alima, on the western coast of Mexico. Rather than intruding upon the landscape, the cabana and swimming pool are meant to feel integrated into the site, which is blanketed with vegetation, and slopes down toward a beach and the sea.

"With this idyllic scenario, imposing the programme upon the site as if it had fallen almost randomly resulted devoid of a true significance," said CDM, an architecture studio based in the Mexican city of Zapopan. 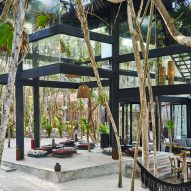 "The somewhat unconnected roofing structure of a palapa was rethought into a cover that would extrude from the mountain itself towards the ocean, while the water should flood the stone to generate the pool, almost in a way of a pond remaining after the turning tides."

The cabana consists of rectangular volume topped with a thick, overhanging roof, with ivy dripping over the edge. The flat roof is intended to do more than shelter the building.

"The cover is a mutable space that transforms into a true viewpoint overlooking the immensity of the horizon during the daytime, and an observatory for the stars at night time, favoured by its distant position from artificial light sources," the team said.

Inside, the cabana offers a comfy place to relax and take refuge from sun. Caramel-toned wood wraps the ceiling and walls, adding visual warmth. The side of the room abutting the hill is clad in stones, helping reinforce the connection to the natural context.

Wooden cabinetry and furnishings fill the space. On chairs and sofas, ivory-coloured cushions are paired with accent pillows in grey and gold. The space is cosy yet restrained, with a nautical-themed chandelier adding a whimsical touch.

"While always trying to maintain the relationship between built and wild, the indoors opens completely to allow the breeze and the red sunset light to inundate the space, aided by the hues of cedar covering the walls," said the team.

A pathway leads down to the swimming pool, which was carved into a rocky outcrop. Multi-tonal tilework lines the basin, although portions were left exposed to the rocks – once again emphasising the architecture's connection to the natural environment.

Other projects in coastal Mexico include the Hotel Mar Adentro by Taller Aragoné, which consists of white blocks that appear to float on reflecting pools, and the Habitas Tulum boutique hotel, which offers rooms with natural palapa roofs and pale cloth walls.

Photography is by Rory Gardiner and Javier Dueñas. 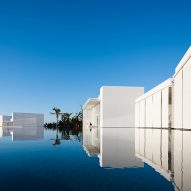