Architectural historian Beatriz Colomina wants to know what people get up to in bed – it will affect the way we design cities in the future, she says.

Colomina, who is a professor at Princeton University, has hosted two events she calls bed-ins, to explore the role of the bed in the architecture of the digital age.

The combination of smart-phone technology, the flexible and untethered nature of work, the sharing economy, and the rise of co-living has given the "horizontal architecture" of the bed a new significance, she claims.

"With our phones, our lives have changed," Colomina told Dezeen.

"Cities that we inhabit now are the result of the huge transformation in our lives with the arrival of industrialisation, the separation of the place of living and the place of work, and the idea that you leave the home to work," she told Dezeen.

Most young people work from bed

The project started after Colomina read an article in the Wall Street Journal that shocked her, stating that 80 per cent of young professionals were working from their beds.

She has since written several texts exploring what architecture should look like now that the nine-to-five office is no longer the typical workplace, including The Century of the Bed and The 24/7 Bed.

"Our cities should already be changing," she said. "We should think very seriously about what a bed is today, and what kind of city will actually accommodate our new ways of living and working."

Ideas around work and sleep, Colomina said, have always been in flux. In medieval times people used to sleep in stages, waking up in the middle of the night to be productive, both in work and sex. It was industrialisation that led to a schedule of eight hours sleep, and a more rigid separation between work, leisure and sleep.

Now workers co-ordinating across different time zones are returning to a flexible sleep schedule, in order to make conference calls with offices on the other side of the world. 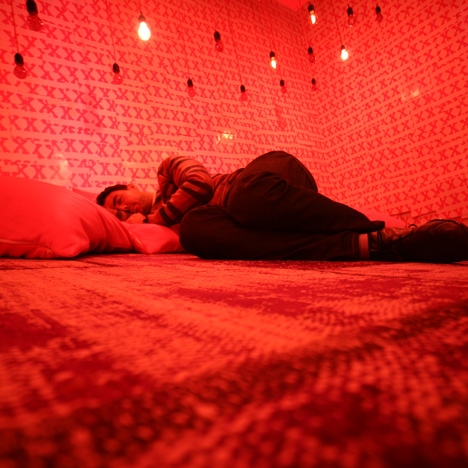 "On the one hand this economy seems to be making all of us sleep deprived, sleep is a luxury" she explained.

"But it's also work, with millions of people with insomnia and all kinds of sleeping problems. The psycho-pharmaceutical industry is coming out with new products to help you sleep every year, an army of sleep experts telling you that you have to use a certain pillow," she added.

"Sleep has become work, hard work. It's an obligation."

Cities are adapting for naps

Shifting attitudes to sleep are already creating new typologies of urban architecture. With business leaders such as Arianna Huffington extolling the virtues of sleep – Huffington even markets a range of miniature beds for people to tuck their smartphones into at night – napping pods are started to pop up everywhere.

For instance, bedding brand Casper recently opened a series of rentable nap rooms in New York, while architects including Jürgen Mayer H and Hassell have developed designs for sleep stations that could be introduced into offices.

"It's a bit like a sex hotel, without the sex," said Colomina.

"These new hotels that have sleeping pods, are very reminiscent of the Archigram designs of the 1960s," she added.

"This is the funny thing, in the 60s architects and designers were taking this question of a future with more leisure and less traditional work seriously. And now that it is upon us, we are not thinking about it enough."

Colomina hosted her first bed-in inside the Dutch Pavilion at this year's Venice Architecture Biennale.

Curator Marina Otero Verzier had invited artists and thinkers to respond to the title Work/Body/Leisure. Colomina chose to re-create the 1969 protest performance of Yoko Ono and John Lennon, which saw them spend their honeymoon week in the big white bed of room 902 at the Amsterdam Hilton.

Frustrated by the media's invasion of their privacy, the celebrity couple had turned the tables on journalists, invited them to bedside interviews where they spoke out against the Vietnam war from nine in the morning to nine at night.

Once the media had been sent home, the pair turned their attention to the equally hard work of trying to conceive a child.

Interviewees open up in bed

Colomina recreated room 902 by inviting architects and other people she knew at the biennale to come and be interviewed about their own relationship to bed, sleep and work.

Hans Ulrich Olbrist, artistic director of the Serpentine Gallery in London, invited Colomina to re-create her interpretation of the bed-in in London after his own impromptu session in the bed.

"I didn't know he'd be around," said Colomina. "But he walked into the pavilion and I said 'Oh, jump in!' He loved it, that's why he asked me to do it in London."

As part of the Serpentine Gallery's Work Marathon event, Colomina took to her bed inside the Frida Escobedo-designed pavilion. She invited friends and experts to don pyjamas and join her for a series of back-to-back interviews exploring how the way we work today will shape the cities of tomorrow.

"People are different when they get in bed. They put on their pyjamas and they are a different person," she said.

"Something else happens when you are in the horizontal. A lot of people say things they probably wouldn't have said, all sorts of things came out."

Colomina is the founding director of the Media and Modernity programme at Princeton University, and professor and director of Graduate Studies in the School of Architecture. She has written numerous books on architectural history, including Sexuality and Space, and Domesticity at War.