Architecture firm Taller Hector Barroso has designed a housing complex in Mexico City, with warm-hued concrete walls inside and out.

Based in the city, Taller Hector Barroso designed the building with a rectangular form based on three separate, square-like towers linked together.

"This proportion and the east-west orientation resulted in a compositional scheme which parts from three volumes interleaved with three "patios" and voids," said the studio.

LC710 is constructed of steel and concrete, which is mixed with a coloured aggregate that resembles pale wood.

The materials were chosen to be durable in the city's humidity, low maintenance, and to age gracefully over time.

The project is also characterised by three curved, concave patios on its upper storeys. The entrance at ground level curves the opposite way with a convex wall.

Inside the first tower, closest to the street, are four duplicated floor plans: each including an open-plan kitchen, dining and living area that joins a terrace. Within the second portion are three bedrooms and two bathrooms for every level. A hallway spans the long-section, connecting the three towers together.

For the third tower in the rear of the property, a different configuration was employed. This structure itself houses a pair of two-storey residences, with matching layouts.

The lower level includes living and kitchen area with an outdoor deck, while three bedrooms and two bathrooms are located upstairs. This layout is then duplicated for the top unit. 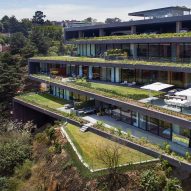