Concrete sound mirrors, used in the UK to intercept coastal attacks in the aftermath of the first world war, are captured in this photography series by Piercarlo Quecchia.

Sound mirrors are disc-shaped passive structures that are used to reflect and concentrate acoustic waves. They were used during the 1920s to intercept planes headed for the coast.

Most often constructed in concrete with a diameter of two to three metres, they could at one time be found all along the southeast and east coast of England.

In his series, called Sound Mirrors, Quecchia wanted to show how these devices take on an architectural form. He photographed the last 13 mirrors that remain on the English coast.

"They represent an incredible demonstration of how sound can generate a physical form: both the curvature radius and the dimensions of the dishes are studied and designed according to the sound frequency that they must reflect," said Quecchia.

The precise shape and curve of the mirrors enables them to concentrate sound at a single focal point, where an operator would use a microphone and earphones to listen. The dimensions were matched to the sound waves create by aircraft engines.

Before the creation of advanced radar and electronic technologies, surveillance systems were simply an extension of the human senses. At almost 100 years old, the giant sound mirrors are now weather-worn and abandoned. The photographer hopes his images will bring back some dignity and value to them.

Quecchia is currently based in Basel where he works with an architecture studio, but he pursues photography as a freelancer.

"Photography for me is mainly a tool to understand and tell about reality. I mainly focus about architecture and social dynamics," he explained.

"I've been always fascinated by abandoned buildings, especially in the changing of their role according to the different historical period."

Quecchia discovered Britain's sound mirrors through an image he saw on the cover of a UK-based psychedelic rock band.

After researching the locations, he used the satellite view on Google Maps to pinpoint the exact location of the mirrors. 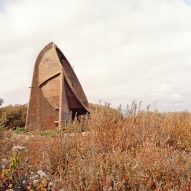 "The strong materiality of the concrete and their huge dimensions makes the sound mirrors spectacular and extremely fascinating structures, able to dominate the entire surrounding landscape," he said.

Quecchia completed the series in the summer of 2018 and is now working on an online platform where he can share an audio recording he took in each of the locations.

Italian photographers Roberto Conte and Stefano Perego are also fascinated by the role of architecture in documenting social history.

They worked together on a series of images that document the remnants of Soviet architecture in Georgia, including facades, monuments and whole buildings that showcase the country's communist-occupied history.