Roberto Conte and Stefano Perego have captured the architecture and monuments of post-war Soviet Georgia in their latest photography collection.

Conte and Perego took photographs of 12 buildings built after the Second World War, in the country that was part of the Soviet Union from 1922, when it was established, until its fall in 1991.

"What I like about these buildings is their unconventional beauty and powerful impact, and it's interesting to see how each country of the former Soviet Union developed its own approach to planning and building," said Perego.

The collection includes a pair of iconic buildings in Georgia's capital Tbilisi – the former Ministry of Highway Construction (now the headquarters of the Bank of Georgia), built by George Chakhava and Zurab Jalaghania in 1975, and the Palace of Rituals, built by Victor Djorbenadze in the mid 1980s.

"They are a part of the Georgian architectural heritage," said Conte.

"Before the involvement of international architects in contemporary Tbilisi, local architects managed to design extremely interesting buildings absorbing global and Soviet influences and then merging it with a peculiar local style."

Chakhava and Zurab's geometric creation appealed to the photographers because of its complex shape and unusual position alongside a river.

"The design itself is absolutely astonishing, with a kind of mixture between metabolism, and the horizontal skyscrapers planned by the Soviet and constructivist artist-cum-architect El Lissitzky back in the 1920s," explained Conte.

The Palace of Rituals was built to provide a solemn place for non-religious weddings and rituals. The Soviet Union was officially atheist and during its reign many of these structures were built to use in place of spaces of worship. 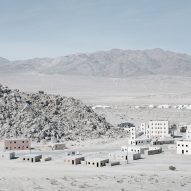 "We have seen many of those structures in our travels in the former Soviet Union but the one in Tbilisi, with its elegant, sinuous and almost expressionist lines, moreover standing on the top of a hill, is probably our favourite," explained Conte.

Other images feature sculptures, monuments, educational buildings, decorative reliefs on otherwise severe facades, and office blocks. Many of the buildings are in various states of disrepair; at risk of falling into ruin, or being condemned in place of new developments.

"Even if they are not very well known, these buildings have an impressive design and a very strong visual impact. They tell a lot about an era and its artistic value, an era of creativity and experimentation," explained Perego.

Perego and Conte met in 2006 while both photographing abandoned places on the outskirts of Milan. Together they continued to explore and research deserted architecture and various other historical themes that are captured in the built environment.

"Our research brought us towards the abandoned Soviet Army bases scattered all over the woods of former East Germany. Exploring those places raised the interest in that part of our recent history," said Conte to Dezeen.

"It was a kind of natural consequence to end up seeing what happened on the other side of the Berlin Wall."

Austrian photographer Gregor Sailer collected images of eerie fake cities in a series called The Potemkin Village, including a Swedish car-testing facility built to look like New York, faithful replicas of European cities in China, and combat training towns in the US and Europe.