Carla Joachim and Jordan Morineau, who make up Studio Joachim-Morineau, created the machine to fuse together the precision of technology with "glitches", to make objects that are similar but not identical.

Designed and built by the duo, the industrial machine drips liquid porcelain, or earthenware, at a particular rhythm to create a series of cups and bowls with various structures and patterns.

The machine is composed of two main parts – a computer-controlled rotating platform and a dripping system. A plaster mould is placed and centred on the platform and is turned via a simple motor, with its speed determined by a pre-set computer code.

Liquid clay is then poured into a container attached to the top of the dripping system. By opening the tap, liquid clay feeds through a nozzle and starts to drip, landing on the plaster mould. The diameter of the nozzle can be changed depending on the desired drip size.

As the duo told Dezeen, not everything can be controlled in the process. The flow can be irregular, for instance, or the liquidity of clay can vary depending on the vibration of the machine, influencing the outcome.

"Our machine is the link between crafts and industries," said Studio Joachim-Morineau. "We can produce the same object at almost an industrial level, however each piece is unique."

"We are giving a frame to the pieces that are going to be made – by the shape of the mould and the computer program – but we let the material create its own path, and these differences give the ceramics a natural, human character," they added. 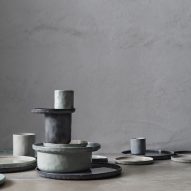 The constant speed of rotation and dripping flow causes the drops to always land on the same spot, while gravity pulls them slowly towards the centre of the plaster mould. Eventually, the layers accumulate and form a self-supporting structure.

By using moulds of varied angles, different open structures can be made – some moulds are wide, shallow and smooth, while others are narrow and ridged.

Developing this idea, the designers then researched how different angles of the moulds can influence the shape of the drops to create different patterns within the ceramics.

A mould set at a more acute angle, for instance causes the drops to slide down the mould before settling, forming a line and a dot pattern. While on a shallower mould, the drops don't spread and look like dots.

After the clay drips have set slightly, a liquid clay body is poured into the mould over the drops. The plaster absorbs the water from the clay, and after a few minutes the clay is poured out, leaving a layer of solid clay in the mould. This is then ready to be fired.

Using this same process, Joachim and Morineau experimented with different textures by dripping liquid clay onto a mould on the moving platform.

The drops left on the mould are covered with a thin layer of clay, using the slip casting technique, which is then poured out to reveal a texture that is only visible on the inside of the object.

Joachim and Morineau's ceramic dripping machine, and its results, will be on show during this year's Dutch Design Week, which is taking place from 20 to 28 October 2018 in Eindhoven.

At the event, Dezeen will be hosting a special edition of our Good Design for a Bad World talks, where we will ask if design can harness humans' negative effects on earth to prevent global catastrophe.

Photography is by Pierre Castignola.