Prague-based jewellery design studio Zorya has grown an 18-armed chandelier from crystals within the Museum of Decorative Arts in Dresden, Germany.

Made using controlled mineral crystallisation and based on a Theresian era design, the chandelier is the focus of an exhibition called From Dust to Glitter or How a Crystal Chandelier grows, that is currently on show at the museum's Pillnitz Palace.

The project was initiated when the director of the Museum of Decorative Arts, Tulga Beyerle, spotted Zorya's prototype of the current chandelier at the 2012 edition of the Křehký Mikulov art design festival.

Here it was on show as a proposal stemming from the studio's Virus jewellery collection that was created in 2011 using a controlled mineral crystallisation process.

Impressed by the chandelier prototype, Beyerle asked the designers to create a similar design for the museum.

It took six years to develop the controlled crystallisation process required for a work of this scale.

The bespoke chandelier was grown in a temporary laboratory set up on the premises of a former coffee-roasting factory in Prague's Vysočany district, before being assembled in-situ at the museum over several weeks by the founders of Zorya, designers Zdeněk Vacek and Daniel Pošta.

The process involved submerging each of the chandelier's eighteen stainless steel arms in five thousand litres of a potassium aluminium sulphate solution for several weeks.

As a result of time and temperature changes, the chandelier components gradually accumulate alum crystals. Due to the unpredictable nature of the growing process, the crystallisation determines the final shape of the chandelier.

The exhibition has been divided into two stages – the first of which, called Growth, took place between 25 August and 12 September and allowed visitors to observe the chandelier as crystals continued to grow on its arms over a three week period. 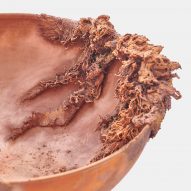 Set up in the entry hall of the Bergpalais, Zorya conceived the Growth scenography as a recreation of the temporary laboratory that the chandelier was originally grown within. Here, the chandelier was showcased alongside a video by photographer Karin Zadrick, which documented the making process.

The second part of the exhibition began on 15 September with a lighting ceremony with the illuminated chandelier on show until 4 November 2018. The installation is completed by an artistic video directed by Milan Chadima depicting the non-traditional nature of the production of the artwork.

After 4 November, the chandelier will remain at the Pillnitz Palace as part of the museum's permanent collection.

"I have been following the work of Zorya since many years and immediately after starting in the Museum of Decorative Arts in Pillnitz Castle, I had this vision of a mad-to-measure chandelier in the main hall of the Bergpalais," said the exhibition's curator and museum director Tulga Beyerle.

"A dream is coming true, shortly before I leave the museum. The dedication and precision of Zorya, combined with their creativity and knowledge of this process results in a unique object, which enriches Pillnitz Castle. I am very proud and very grateful for this donation."

As part of a wider project exploring vegan design, Israeli designer Erez Nevi Pana made a stool by submerging a collection of material scraps in water from the Dead Sea for several months. When the materials emerged, they were coated with a "skin" of salt crystals.