Japanese brand Muji has revealed designs for an autonomous shuttle bus built for all weather conditions, set to hit the roads in three Finnish cities by 2020.

The public shuttle bus, called Gacha, is designed in collaboration with Finnish autonomous driving company Sensible 4. According to Muji, it is the first autonomous bus in the world that is suited to all types of weather.

"Weather plays a critical role in opening the market for autonomous buses or robo-taxis," said the brand. "Currently heavy rain, fog, and snow prevent autonomous vehicles from driving, as the existing technologies are mostly being tested and developed in warm climate conditions."

Sensible 4 tested its technology in arctic conditions, ensuring the vehicle is safe to run without a driver, come rain or shine, even in Finland's harsh winter conditions.

While Sensible 4 developed the algorithms, artificial intelligence and sensory obstacle detection needed to refine the self-driving technology, Muji provided the design aesthetic that earned it its minimal style reputation.

Wanting the shuttle bus to look "friendly" and inviting, the Japanese retailer's design team have applied a stripped-back, monochrome colour scheme to the bus' curved, cubic exterior, which was designed with no distinct front or back. 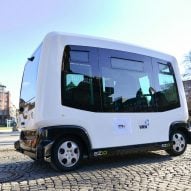 A band of LED light encircles the outside of the bus, acting as both the vehicle's headlights and as a communication screen, informing passengers and passers-by of its movements and destination.

Inside, Muji has kept the design simple, with plain navy seating that follows the curved shape of the exterior body. Handrails and seat rests will be much the same as in most public transportation.

The aim is to roll out the shuttle bus as soon as 2020, starting with the three Finnish cities of Espoo, Vantaa and Hämeenlinna, following its unveiling in Helsinki in March 2019.

"Muji proposes a pleasant life. This not only covers products for daily life, but also the challenges faced by different communities," said the brand.

"The advanced technology of autonomous driving has potential in the countryside where decreasing birthrates and ageing populations are causing problems in these communities," it continued.

A similar vehicle hit the roads last year in October – Germany's first self-driving public bus made its maiden journey in a rural town in Bavaria, taking locals from the train station to the town centre.