New York design studio Breakfast has combined elements of the brick with the pixel to make Brixels, a building block for moving architectural art.

Brixels are designed to make it easier and faster to build large-scale installations based on spinning tiles or bricks.

The tiles can be customised in various shapes, sizes and materials, and Breakfast envisages them being integrated into buildings as walls, facades, railings, dividers or fences.

"We saw an opportunity to blur the lines between what is deemed art, infrastructure and a digital display," said Breakfast co-founder and head of design Andrew Zolty.

"We sought to develop a new medium that would allow us to create a variety of captivating installations that are, at first, perceived as art, and second, deliver relevant information and unique experiences."

Viewed from a distance, an installation made with Brixels can look like a digital display, with each brick standing in for one pixel. And as with pixels, each Brixel is controllable, via an app that communicates with the installation.

The installations can also be made interactive. To demonstrate some of the potential of the tiles, Breakfast have used them in an installation of their own design, the six-foot-tall Brixel Mirror.

Made of 540 aluminium Brixels that are polished on one side and black on the other, Brixel Mirror is so called because its tiles spin around to mimic the position of the people standing in front of it. 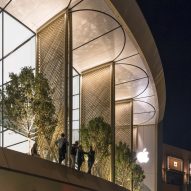 When no one is within range, the Brixel Mirror reverts to displaying text or moving in a wave-like motion — programmes that can be selected from the smartphone app.

For this installation, Breakfast has further customised the Brixels by lining their bottom edge with LEDs, so they make an impact after dark.

A key feature of Brixels is that they can spin endlessly in either direction — they are built into the central support column in a way that ensures no tangled wires.

Breakfast designed Brixels after working on a number of kinetic sculptures, including several iterations of Flip-Discs. The studio wanted a tool that would let them work faster but still be flexible, and will particularly target the architecture industry.

"The architecture and interior design industries have seen little innovation in terms of how to integrate digital content and information in an aesthetically appropriate way," said Breakfast.

"When it comes to integrating digital elements into a space, it almost always comes in the form of a glowing rectangle. Brixels' ability to adapt in both look and form allows it to meld into an architects' particular vision for a given space," the studio continued.

"In the hands of industry innovators, this new technology can usher in an aesthetic defined by kinetic walls and installations that are as mesmerising as they are functional."

Breakfast is now taking commissions for custom installations, and says it is already in talks with several brands and institutions, including the Cooper Hewitt Smithsonian Design Museum in New York.

Among buildings to incorporate kinetic architecture in recent years is Soma's One Ocean Pavilion with its rolling facade and Foster + Partners' Dubai Apple Store, which has filigreed shutters that fold like wings.