Stockholm's new council is stopping development of an Apple Store by Foster + Partners and the David Chipperfield-designed Nobel Center, as well as halting the city's Winter Olympic bid.

The chance of any of these major projects happening has been greatly reduced now that a coalition of the Alliance parties and the Green Party have taken control of the Swedish capital's council, following elections in September.

The new Alliance and Green-led city council aims to block the building of an Apple Store on the Kungsträdgården – King's Garden – and will not appeal a court decision to block construction of the Nobel Center. The group also plans to abandon Stockholm's bid to host the 2026 Winter Olympics

According to English-language news outlet The Local, "two policies agreed on by the parties were that plans for a new flagship Apple Store in the city centre will be stopped, and that Stockholm will not host the 2026 Winter Olympics".

"Apple House in Kungsträdgården will be stopped"

Apple's plans to build a store designed by Foster + Partners, to replace a TGI Friday's restaurant within the Kungsträdgården, have been controversial since they were first revealed in 2016.

Initial plans were scaled back following criticism, as the building would be larger than the existing restaurant, and would see a change of use from entertainment to retail. The revised plans were given the go ahead by the former city council, but look likely to be stopped by the new regime.

"The Apple House in Kungsträdgården will be stopped. They are welcome to settle in Stockholm, but not in Kungsträdgården," Erik Slottner, group leader of the Christian Democrats – one of the four party's in the Alliance – said at a press conference after the election.

Stockholm's rejection of an Apple Store follows a similar controversy in Melbourne, where 53,000 people signed a petition in protest of the tech giant's plans to build in the publicly owned Federation Square. In response Apple has redesigned the store, but the overhauled plans have also been met with criticism.

"Stockholm will not host the 2026 Winter Olympics"

The other major policy that the new Alliance and Green-led city council agreed on is that Stockholm should drop its bid to host the Winter Olympics in 2026.

The city has been shortlisted alongside bids from Milan with Cortina d'Ampezzo, and Calgary, to be the host of the 25th winter games. Each of the cities now has until 11 January 2019 to submit its candidate file, as the next stage of the bidding process. However Stockholm looks set to withdraw its bid.

"The starting point for all our parties has been to ensure that a Winter Olympics will not be funded by taxpayers' funds," said Karin Ernlund, a member of the Center Party – another of the parties in the Alliance – told Swedish national public broadcaster SVT Nyheter.

"The games must also be arranged in a way that does not cover our environmental and climate work. The assessment is also that Stockholm faces other major challenges we need to work with. Therefore, Stockholm will not host the 2026 Winter Olympics.''

Nobel Center ruling will not be appealed

The election of the new Stockholm council is also expected to bring to an end to the long-running saga over plans to build a cultural centre and permanent home for the Nobel Prize on the city's waterfront.

Construction of the £100 million David Chipperfield Architects-designed Nobel Center was blocked by a Swedish court earlier this year, with the suggestion the building would cause "significant damage" to the city's historic waterfront.

At the time it was reported that the City of Stockholm would appeal the verdict. However, the newly elected Alliance and Green-led city council is unlikely to carry out this appeal. 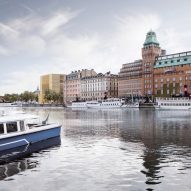 David Chipperfield Architects remains hopeful that a solution can be found, which will allow the Nobel Center to be built in the city.

"The project for the Nobel Center has been developed over the last five years through a process of continuous dialogue between the client team, planners and the city authority. We are, therefore, extremely disappointed by this announcement," said a spokesperson from David Chipperfield Architects.

"The vision and purpose of the Nobel house as a centre of dialogue, debate and understanding has gained enormous support for both its international and local significance, and we all believe that Blasieholmen is a suitable site for a place of such civic importance.

"While we acknowledge that this rather neglected site holds a sentimental place in the minds of the people of Stockholm, we remain convinced that this is a fitting location. We hope that the conversation will remain open and an acceptable solution for the Nobel Center will be found."