Global studio Sasaki are masterplanning the Chengdu Panda Reserve to protect the animals, while also accommodating growth in the rapidly expanding Chinese city.

The 27-square-mile panda reserve, planned for Chengdu – the capital of the Sichuan Province in southern China – will be deigned by Sasaki following a government-sponsored design competition.

One of the main aims of the project is to demonstrate that pandas and humans can coexist. There are roughly 1,800 giant pandas left in the wild, with another 300 in captivity.

"Although urbanisation and conservation are often in conflict with each other, the Chengdu Panda Reserve provides a framework for the protection of the giant panda and its native habitat, and strategies, which will lead Chengdu into a more resilient future," Sasaki explained.

"The Panda Reserve will organically combine the ecological and cultural value of giant pandas with the beautiful and habitable park city of Chengdu, and it meets the national, provincial and municipal planning and development objectives."

The studio designed the scheme around three main goals – conservation, education and research. The vast development will feature three separate sites, each with a different function and level of interaction with pandas.

The most extensive of the three sites is the Beihu Panda Park, which will have an education centre near downtown Chengdu and attractions including botanical gardens, wetlands and a sports park.

The centrepiece of the park is the existing Chengdu Panda Base, which opened in 1987 and draws over three million visitors a year. It will be tripled in size and continue to serve as a breeding facility for giant pandas.

"Three additional metro lines and six new metro stations are proposed around the Beihu Panda Park, which will not only impact how visitors arrive to this part of the reserve, but also how urban development around these stations are built," Sasaki principal Tao Zhang told Dezeen.

The second proposed site is Longquanshan Panda Village, which will be located near Chengdu's new airport, slated to be fully complete in 2030.

The village will offer programming related to the region's culture and wildlife, including the giant panda.

The most remote of the three sites is the Dujiangyan Panda Wilderness, located at the foothills of the Tibetan plateau. 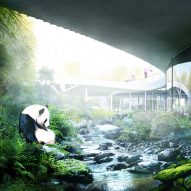 The wilderness area will allow researchers to focus on breeding techniques and the release of captive pandas into the wild.

Over 20 million people are expected to visit the Chengdu Panda Reserve each year.

"This comprehensive vision will take time to be realised," said Sasaki. "With a 69-square-kilometre site, full build-out is likely to be phased over the next part of a decade or more."

The project follows the Chinese government's announcement in 2017 that it plans to create a Giant Panda National Park. Encompassing 2.7 million hectares, the park will span three provinces – Sichuan, Shaanxi and Gansu.

Architecture studio BIG are also designing a project for pandas –  a yin-and-yang-shaped Panda House for Copenhagen Zoo. The building is being built to house two bears that are being relocated from Chengdu.