Italian designer Emma Sicher has combined food waste with bacteria and yeasts to create disposable packaging, in a bid to provide a sustainable alternative to plastic.

The project, called From Peel to Peel, sees Sicher make eco-friendly food packaging and containers by fermenting microbial cellulose, a symbiotic culture of bacteria and yeasts – also known as scoby – with fruit and vegetable leftovers.

The microorganisms in the scoby substance reacts with the fructose and vitamins still naturally contained in food waste to proliferate and create layers of cellulose – a key structural component in the walls of plant cells that helps them remain stiff.

To create the material fruit and vegetable scraps are soaked in water with scoby and acetic compound. The microorganisms turn the fructose and vitamins in the scraps into pure cellulose, until it forms a gelatin-like material.

This mixture is then left to rest for two to four weeks, depending on the desired thickness, before being dried at room temperature. Once dried, it becomes a translucent sheet of material, sharing similar characteristics to paper, plastic and leather.

The material can be dried on different surfaces to achieve various textures and patterns – the smoother the drying support the shinier the cellulose will be, for instance a layer dried on a plexiglass board will resemble plastic.

Sicher also experimented with different fruits and vegetables like apples, potatoes, beetroot, grape pomace and beer hops to create different colours and textures of the material.

The designer hopes her organic wrapping could act as a replacement for the widely used plastic and paper packaging, which is one of the main causes of earth and marine pollution.

According to European commission Eurostat, from 2006 to 2015, paper and cardboard were the main packaging waste material in the EU (34.8 million tonnes in 2015), followed by plastic and glass (15.9 and 15.8 million tonnes) – with a significant percentage of this in the form of food packaging. 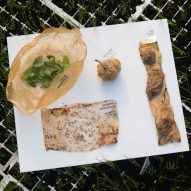 Sicher wants industries to start treating food packaging as a natural peel for the items contained inside, taking direct inspiration from Italian designer Bruno Munari who said, "nature is the first producer of packaging in the world: every peel, shell or skin aims to protect its content."

"Most food gets packaged in materials that are engineered to last forever, and most of the food has a short life cycle in comparison to its containers," said the designer.

"By developing a packaging that follows the natural principle of acting as a peel for its content, the aim is to get closer to nature again by providing a more sustainable alternative to what is currently offered by the food industry," she added.

In addition to requiring less energy and resources to make it, the microbial cellulose packaging can be composted with organic waste, eventually turning into fertiliser for the soil.

The cellulose is very absorbent but at the same time more water-resistant than ordinary paper, making it suitable for containing many types of dry food such as flour, sugar, pasta, rice, tea leaves, dried fruits and so on.

The material could also be used as short-usage food containers such as holders for sauces, french fries, sandwiches or street food in general – as long as the consumption is quite fast.

Due to its high hydrophilicity, the packaging, left natural without any coating, is not suitable to contain water or oil-based substances, and would need to be treated with beeswax or natural impervious finishes to do so.

In a similar project, graduate Roza Janusz also used scoby to create an alternative to plastic food packaging that can either be eaten after use, or composted, in a bid to "enrich" rather than litter the environment."